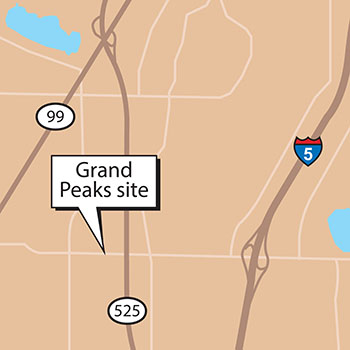 The site is next to the Swamp Creek Park & Ride.

Just north of the Lynnwood city line, at 3223 – 3225 164th St. S.W., a nearly 5-acre development site sold last week for about $11.8 million, according to Snohomish County records. The buyer was Lynnwood 164 Apt LLC, which is associated with developer Grand Peaks of Denver.

That firm is planning a two-building midrise apartment project with about 326 units. One level of underground parking is proposed. County records indicate that Tiscareno Associates is the architect, and Exxel Pacific the general contractor. Grand Street didn’t provide more details before deadline.

For the recent sale, public records indicate a loan from PNC Bank. The deal was worth about $55 per square foot for the land. The seller was M&M Associates GP, associated with Pacific Real Estate, which acquired the property in 2018 for nearly about $5.1 million. Sales efforts have been ongoing since at least 2017, with various apartment schemes attached.

The plan calls for a new access road, Admiralty Way, to serve both the new apartments and the Park & Ride. The latter will evidently lose a few parking stalls.

The project appears to be Grand Peaks’ first in our market. The privately held firm has management and development arms. It lists a current portfolio of 41 multifamily properties under management or ownership, which it values at $2.5 billion. Most of its holdings are Denver, Texas, Florida, Arizona and Oregon.