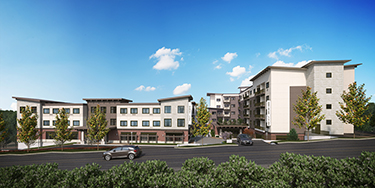 Image by Ross Deckman and Associates [enlarge]
The Belle Harbour complex will have 140 units for assisted living and memory care.

Despite the coronavirus outbreak and statewide construction pause on most projects, two East Bellevue senior housing projects are still at work.

Just a few blocks away, at 1835 116th Ave. N.E., the six-story Aegis Overlake is nearing completion

RJ Development says the state of Washington deemed Belle Harbour an essential project. Koelsch has completed most of the excavation and foundation work. Its workers remain active on the site.

Belle Harbour will have two buildings: The Park, for assisted living, and The Inn, for memory care. Koelsch, the general contractor, lists it with a $90 million budget.

Ross Deckman and Associates of Puyallup is the architect for the project, which will have about 128,200 square feet above grade.

The site is directly west of the Cross Kirkland Connector (aka Eastrail). The two buildings will rise three and five stories above 116th, where a drop-off circle, driveway and garage entrance will separate the structures.

There will also be secondary garage entries to the east and north on Northeast 22nd Place. The parking will total about 85 stalls on two levels, both underground and structured on the sloping site.

The team also includes Lyon Landscape Architects and Terracon Consultants. Completion is expected by the fall of 2021.

The nearby Aegis Overlake is also continuing as an essential project. Exxel Pacific is the general contractor and Ankrom Moisan is the architect. Occupancy is projected for January 2021.

Another Aegis project that’s active on the Eastside is at 1006 Lake St. S. in Kirkland. Compass is the general contractor, and Ankrom Moisan is the architect. Based on a recent site visit, that four-story, 106-unit project isn’t quite as far along as Aegis Overlake. Aegis purchased the Kirkland site, once owned by convicted securities fraudster Lobsang Dargey, in 2017 for a little over $10 million.