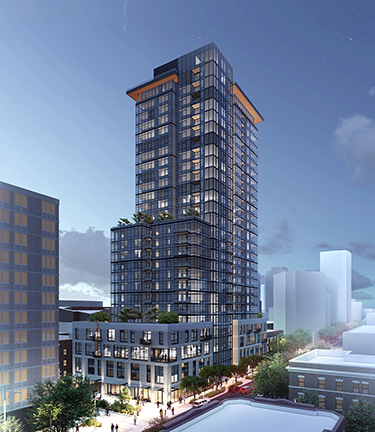 Rendering by VIA Architecture [enlarge]

Looking northwest, The Confidential’s many terraces are evident.

The bike lane has suddenly shifted east among new orange traffic barriers at 2315 Fourth Avenue, and crews from Exxel Pacific are now ripping up the bare concrete slab where the Two Bells Tavern once stood.

Security Properties has long planned a high-rise apartment building there at the corner of Bell Street, now dubbed The Confidential. It confirmed this week’s groundbreaking with a statement, and expects construction to last around 28 months.

VIA Architecture designed the 29-story, 212-unit project. It’s also slated to have 8,753 square feet of retail/commercial space, with 16,710 square feet of offices in the podium.

The new name reflects Belltown’s heritage as Film Row; a handful of such surviving structures do still remain on Second, Third and Fourth avenues.

Security Properties’ Michael Nanney said in a statement, “Units average over 900 square feet in size, with many having dedicated work-from-home spaces within the units. The majority of the units also have balconies. This is a true post-COVID building that incorporates all of our lessons learned operating properties in Seattle through the pandemic.

“One other thing I would point out is that the unit count is less than half of what you are typically seeing in high-rise towers in Seattle these days, which we believe will allow us to have a great community where residents really get to know each other.”

VIA’s plans call for a unit mix from studios to three-bedrooms. Apartments will begin on the fifth floor — the top level of the podium. The latter also includes two levels of parking (plus the offices); four levels of underground parking brings that total 243 stalls. Access will come from the alley to the west.

Amenities will include various terraces, a gym, lounge and small theater.

Total project size is around 374,000 square feet, including the parking; the Mandatory Housing Affordability fee was previously calculated at slightly under $4.5 million.

Security Properties estimates the budget at around $200 million. It assembled the corner during 2017-2018 for almost $17 million, then secured its master use permit in 2020. The developer says a construction loan will close soon, and that MetLife Investment Management is its equity partner in The Confidential.