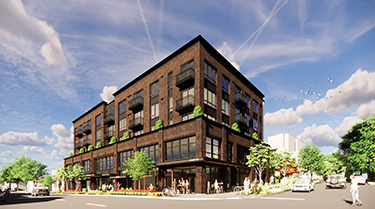 Rendering by Studio Meng Strazzara [enlarge]
About 5,000 square feet of retail/commercial space is planned.
Hilltop Service Station, at 523 15th Ave. E. on Capitol Hill , has had a long, polluted path to redevelopment. The former gas station and auto shop will be razed for a new five-story, 68-unit apartment building designed by Studio Meng Strazzara. Exxel Pacific is now attached as the general contractor. The construction permit came last month, and the site is now fenced and awaiting demolition.

Owner Hunters Capital received a master use permit two years ago, and environmental remediation has been underway for years. Although the state Department of Ecology doesn’t yet show on its website a determination of no further action (NFA); that will likely come after the excavation and soil removal for 21 underground parking stalls. The owner’s website indicates that some or all of the three empty old fuel tanks have been removed.

Hunters also recently told Capitol Hill Seattle blog that work was poised to start on what it now calls 523 Hilltop, on the corner of East Mercer Street.

About 5,000 square feet of retail/commercial space is planned. Units will range from studios to two-bedrooms. Tenants will also have a roof deck and bike storage with 66 stalls.

All that contributes to a total project size of about 51,000 square feet. The Mandatory Housing Affordability fee is estimated at nearly $1.1 million. Hunters acquired the corner four years ago for nearly $2.8 million. Public records indicate a recent nearly $22.2 million construction loan from HomeStreet Bank.

Past use as a gas station and repair shop goes back to 1966, says Hunters. Gas was last pumped in 2018. The shop was known in past years as Bergie’s, for the Bergamini family.