Aegis Laurelhurst has permits and bare slabs, hopes to break ground next spring

Aegis Laurelhurst has permits and bare slabs, hopes to break ground next spring 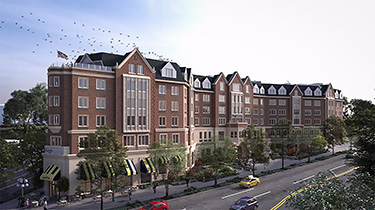 Aegis has preserved and removed the old Benton’s Jewelers sidewalk clock, which will return after construction.

The old Baskin-Robbins and other small retail/restaurant buildings have all been removed from the Five Corners intersection near Laurelhurst, at 3200 N.E. 45th St. Aegis Living secured its master use and demolition permits about a year ago for the senior community designed by Ankrom Moisan. Exxel Pacific did the demolition, and appears to be the general contractor.

No start date has been announced, though the company website now lists the opening date as 2023 — meaning a possible 2021 start. A phased construction permit was issued in August. Laurelhurst Blog recently reported that May was the old projected start date, and that Aegis hoped to break ground in the first quarter of the new year.

Aegis Laurelhurst will be a six-story building with 135 units (111 assisted and 24 memory care), supportive services, salon and a corner cafe that’s also open to the public. The design is strongly neo-Gothic, recalling similar structures on the University of Washington campus.

Total project size is about 148,000 square feet, and the Mandatory Housing Affordability payment will be a bit over $1.8 million.

The garage entry vehicular drop-off will be on Northeast 45th Place, to the north. (The project is also using 3215 N.E. 45th Place as an address.) The underground parking will total 63 stalls; and there will be 13 bike stalls.

Aegis paid about $13.2 million for the property in 2017. It’s meanwhile under construction on a 106-unit senior community in Kirkland, and nearing completion on the 118-unit Aegis Overlake, which is set to open in March. Aegis also has projects planned in Ballard and, possibly, Seward Park.