The American Institute of Architects Seattle chapter has given awards to 19 projects — from a correctional facility to a karaoke bar.

Seventeen of the projects in the 2011 AIA Seattle Honor Awards were located or envisioned in Washington and two were international.

AIA Seattle said in a press release that integration of sustainable features into the design was a general theme of the submissions.

Other team members are: Schuchart/Dow Construction, contractor; and Perbix/Bykonen, engineer

Admiral Live-Work in Seattle. The architect is zimmerraystudios.

Magnusson Klemencic Associates is the structural engineer, and Lara Swimmer and Robert Zimmer are the owners.

Gray Middle School in Tacoma. The architect is Mahlum.

Arup Japan is a project team member and Starbucks is the owner. 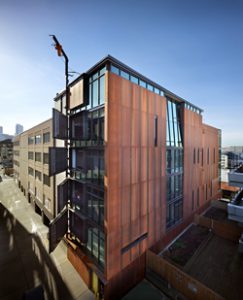