Art Stable, a Seattle condominium project designed by Olson Kundig Architects, was named project of the year by Residential Architect. It was one of a number of projects by Seattle firms that were honored by the American Institute of Architects’ magazine.

There were 824 entries and 40 winners, including one project of the year, 10 grand awards and 29 merit awards.

The Steel Stair, designed by DeForest Architects+ for a home remodel in Seattle, won a grand award in the architectural design detail category.

A list of all the winners is at tiny.cc/ou6xz/. Here are the Seattle winners:

DeForest Architects+ designed the steel stair as part of a single-family house remodel on Lake Washington in Seattle. Roberts Wygal is the contractor.

The project transformed the house, which was full of heavy stone and beams, into a light-filled place for art, food and family, DeForest said.

DeForest called the stair an exercise in minimalism, as well as a study in light, structure and materiality. The goal was to bring the clients’ art collection to light, to create a vertical gallery.

Blackened steel plate serves as a guardrail and structure while maximizing light from the skylight above. An 18-foot high slot window washes one wall. Natural light fills the entire volume thanks to perforated stainless steel treads and risers that appear to dissolve when viewed from ahead and below.

The stainless treads and risers disappear into the wall where they are slotted into a concealed steel stringer. A similar detail conceals their attachment at the guardrail. The blackened steel plate winds up through the stairwell, lapping at each landing and relying on folds for lateral bracing.

Glass Farmhouse is a 1,450-square-foot house that seems to float on the surrounding wheat fields. Olson Kundig said the design of the house and the accompanying wood-frame barn responds to the local vernacular of barns and farmhouses in the Pacific Northwest and the client’s interest in Philip Johnson’s Glass House.

Facing south toward the distant mountains, the house is designed for both cold, snowy winters and hot, dry summers. In the winter, the orientation takes advantage of passive solar heat gain from the low-angled winter sun; in the summer, roof overhangs and a light shelf block the summer sun from entering. Large, operable windows of high-efficiency glass provide cross-ventilation cooling.

The contractor is LD Perry Inc. MCE Structural Consultants is the structural engineering consultant and Brian Hood Lighting is the lighting design consultant.

Deliberate shaping of roof forms and openings, and large operable windows allow breezes to cool the spaces inside. The central hut has window walls that swing up on two sides, allowing the hut to open to the landscaped hillside, pool and ocean views. The kitchen island extends through this window wall when closed. Large decks and screened walkways connect the huts and almost double the livable area.

The beach and site take their name from a slaughterhouse that occupied the site until the 1960s; the 18-acre site had since been taken over by invasive non-native plant species. Most of the landscape has been returned to native species.

It has extensive daylighting, operable windows, energy-efficient lighting and components, a high-performance heating and cooling system with heat recovery, and a high-performance thermal envelope and air filtration system. It also has low-VOC adhesives, sealants, paints and carpets, and composite wood items were used in construction.

Bohlin Cywinski Jackson said it designed Port Townsend Residence, a 2,805-square-foot, three-bedroom, custom home, for residents to enjoy a nearby meadow, woods and views of the Strait of Juan de Fuca and the Olympic Mountains.

It uses sustainable strategies and varied materials — from refined to rustic.

The general contractor is Crocker Construction and the landscape architect is Allworth Design.

Olson Kundig’s Art Stable is a seven-story building with six live/work units and a commercial space at 516 Yale Ave. N. in Seattle’s South Lake Union neighborhood. The site had once been home to a horse stable.

The facade that faces the alley has an 80-foot-5-inch tall hinge topped by a davit crane and five steel-clad, hand-cranked doors that cover nearly a third of the facade. The system is similar to those found in warehouses that allow oversize objects to be moved in and out.

On the streetfront facade, large hinged windows open to provide natural ventilation. Units are designed to be flexibile as users’ needs change over time, and the shell and core is built to last more than 100 years.

Geothermal loops were inserted into the structural piles, resulting in an energy-efficient radiant heating and cooling system.

The project was developed by Point 32 and built by Exxel Pacific. 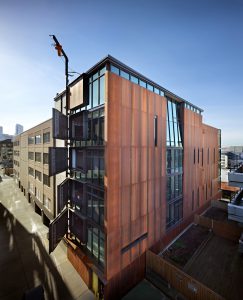