U District bank soon to be demolished for apartment tower 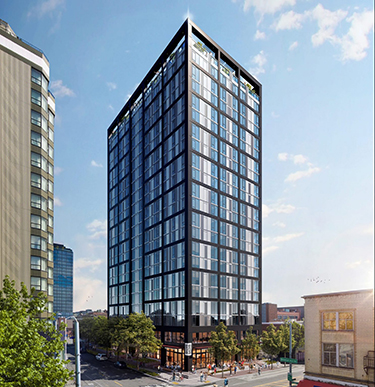 Rendering by Rendering by Runberg Architecture Group [enlarge]
This view looks northeast at the planned B45 tower. The corner of the Neptune Theatre building is at lower right; behind that (south) is the new light rail station.
A demolition permit was recently issued for the shuttered old KeyBank at 1300 N.E. 45th St. And, to replace it, this week a proposed 22-story apartment tower secured its SEPA determination of non-significance from the city. That clears the path for a master use permit, and the latest SEPA filings from developer Barrientos Ryan indicate a summer start date for the University District project dubbed B45.

The tower will rise on the corner of Brooklyn Avenue Northeast, directly across 45th from U District Station, which opens this fall. Exxel Pacific will build the B45 project (aka B45 Gathr), with construction expected to last about two years. Runberg Architecture Group is the architect for a project owned by Cahill Equities of San Francisco.

Numbers haven’t changed much since the last design review in 2020: 342 units, 53 underground parking stalls on two levels, 272 tenant bike stalls and a retail marketplace with around 2,000 square feet. The latter, on the corner, would bleed into the tenant lounge and lobby area.

Design review has been completed for what the city and developer call a 23-story tower. It’ll have apartments up to the 21st floor, amenities and decks on the 22nd, then two levels of mechanical and elevator equipment above.

University of Washington students would appear to be the target demographic for B45. Its units will be mostly SEDUs (small efficiency dwelling units), starting at 277 square feet. Larger units, with up to four bedrooms and 1,126 square feet, would be an alternative to on-campus dorms.

Cahill began in 1911 as a builder in the Bay Area. Today it’s also an investor and developer. It acquired the corner two years ago for about $16.5 million.