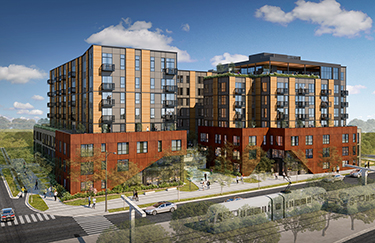 The project is a few steps from the station, which is just west (left) of 132nd in the left lower corner of this depiction. The new Spring Boulevard is in the foreground.

Vulcan has now announced a new name and address for the project, where Exxel Pacific recently broke ground. The eight-story, 249-unit Ondina will rise at 1328 N.E. Spring Blvd. on the corner of 132nd Avenue Northeast.

Runberg Architecture Group designed the project for SummerHill Apartment Communities, which then sold to Vulcan. Its Ada M. Healey said in a statement, “We are looking forward to entering the Bellevue multifamily market. The Bel-Red corridor offers an exciting opportunity for sustainable, transit-oriented development; and Bellevue is poised to add 50,000 jobs, driving strong demand for apartments and rent growth in the years ahead.”

Ondina is actually Vulcan’s third midrise multifamily project to break ground in Bellevue. Two more buildings, with about 360 units, are planned for downtown Bellevue — where the company is developing about 2 million square feet for Amazon.

Ondina will benefit from the city of Bellevue’s Multifamily Tax Exemption program (MFTE), meaning about 50 units will be affordable to households earning 80% of area median income. This summer the city expanded the map for MFTE projects; the provisions sunset after 12 years.

Vulcan hopes to open the new building in early 2024, with East Link up and running. Ondina will be two stops from Amazon’s downtown Bellevue campus, one stop from Facebook’s Spring District campus and two stops from Microsoft’s headquarters in Redmond.

Vulcan’s Scott Matthews said, “We expect demand to surge as workers return to offices, and companies like Amazon and Facebook continue their Eastside growth trajectory.”

A bike room is planned, along with about 187 underground and structured parking stalls — some of which may be stacked. The new project will total about 270,000 square feet. An old warehouse will first be removed. The contractor says the building will be LEED and Salmon Safe certified.

Vulcan says the project name — loosely “little wave”— derives from Latin. Thus the Latin unda, or wave, became the popular Ondine and finally Ondina, which has also become a popular girls’ name. It’s also a genus in the snail family.

Water ties them all together, and Vulcan says the building will employ a courtyard water feature and other design additions to support what it calls Blue Mind Theory. That, says the developer, is “a scientifically supported theory that shows how being near water or images and materials that evoke waterscapes can make you happier, healthier and more connected.”