Bellingham Technical College has started construction of its $27 million Campus Center building. The 72,900-square-foot project is located on campus near Building G.

Exxel Pacific of Bellingham is the general contractor and HKP architects of Mount Vernon is the architect. Exxel’s bid of $16.35 million was about 26 percent below the engineer’s estimate. There were 14 bidders for the project, according to DJC records.

The three-story building will be Type 3A construction, with structural steel framing, bar joists, concrete decks, metal studs and brick veneer. It is expected to be LEED gold certified and includes a solar element and rooftop garden.

Campus Center will replace four aging buildings that are slated for demolition after the new space opens. The old buildings house classrooms and labs for the Computer Networking, Business and Computer Information Systems and Learning Center departments.

Other functions planned for Campus Center are an auditorium, student center and bookstore.

As part of its contract, Exxel Pacific will build about 6,000 square feet of classrooms and offices as additions to two campus buildings, and increase student parking off West Illinois Street.

All work is expected to be finished in February of 2012. 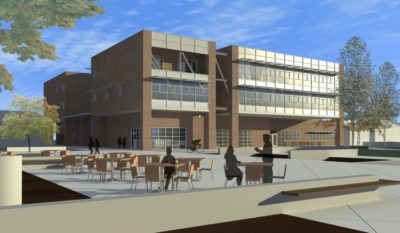