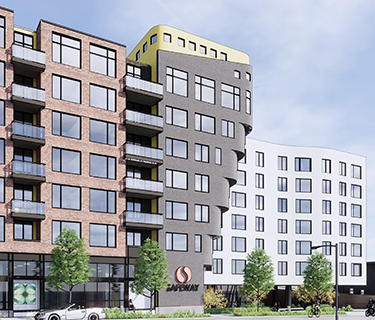 Renderings for the new grocery and apartments are still preliminary, but they indicate the central “eroded bluff” feature. 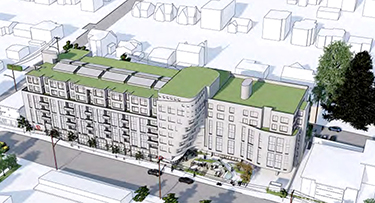 Security Properties and Bumgardner Architects are planning to redevelop the old Magnolia Albertsons at 2550 32nd Ave. W. The store will come back as a Safeway with 136 apartments on top. The proposal has its next design review, in a virtual meeting, on Oct. 21.

Parent company Albertsons will evidently sell the property to Security Properties, then lease back the new store. Nationally and locally, Albertsons has generally been selling off its less valuable locations — sometimes leasing them back, sometimes closing the stores entirely. The University District and Upper Queen Anne Safeway stores are likewise being redeveloped with apartments.

No start date has been announced for the Magnolia project. No application for a demolition permit has been made for the 65-year-old store. And there’s no detailed plan set yet filed in public records, so the numbers remain squishy in this slow-simmering project.

Bumgardner’s preferred design, dubbed “Hybrid,” allocates about 25,000 square feet for the new, larger store. Above, the seven-story building would have a somewhat undulating shape on the 41,200-square-foot midblock site. This would create a public entryway plaza on 32nd and a pronounced, 43-foot setback on the alley to the east — where the zoning steps down to single-family.

The design’s most notable feature is the central “eroded bluff” shift in the west facade, overlooking the plaza and 32nd. The architect says it’s a nod to Magnolia’s famously unstable, ever-shifting topography above Elliott Bay.

The project is participating in the city’s Living Building Pilot Program, which grants extra floor area for various green features. Those will include rooftop solar panels and landscaping, recycling of potable and non-potable water, the public plaza, energy efficient appliances and a tight, energy-preserving building envelope.

Two levels of underground parking, to be accessed from 32nd, would have 200-plus stalls, with a minimum of 75 reserved for shoppers. (There would also be a few short-term structured stalls at grade.) The truck loading dock on thee alley has been a point of contention with community groups. Bumgardner’s solution is what it calls a 90-degree berth — meaning shorter trailers with back-in parking.

The site is across the street from Magnolia Playground and Community Center, and a few steps north from the Magnolia Village commercial strip.