Construction of the Yale Avenue Apartments is underway and expected to be finished in a year.

Designed by Driscoll Architects, the 100-unit complex was originally to be developed by Fortune Group but was purchased four months ago by SeaMark Properties.

It is located at 420 Yale Ave., in the Cascade neighborhood.

The project went through a rigorous design review, to be sensitive — in height and scale — to its southerly neighbor, St. Spiridon Orthodox Cathedral, according to project manager Steve Lampert.

Fortune began the project in 1999, but shelved it because of the economic downturn. Lampert said his firm is seeing more projects being taken off the shelf, a reflection of the improving economy.

Driscoll, originally hired by Fortune, tweaked the design when the project was purchased by SeaMark, adding retail at ground level, a larger lobby and combining metal wall panels with Hardi siding.

The $15.5 million project will have 2,700 square feet of ground floor commercial, three floors of parking and storage, and a large rooftop deck with views of Lake Union and Elliott Bay.

Exxel Pacific is the general contractor. 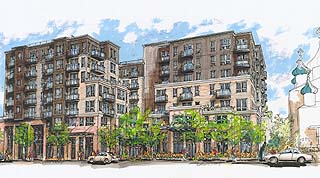