Construction starts on $145M student housing tower in U District 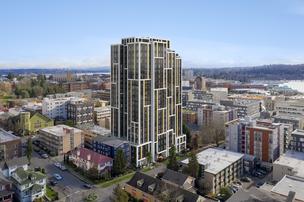 Construction is starting started on Lakeview Student Housing, a 21-story tower in Seattle at 4126 12th Ave. NE. The site is a block from the U District light rail station and three blocks from the University of Washington campus.

Greystar has closed on the acquisition of five parcels in Seattle’s University District, clearing the way for construction of a 21-story student housing tower.

Four older properties with a total of about two dozen rental units will be replaced by Lakeview Student Residences, a 226-unit project with 597 bedrooms. Demolition prep work will begin next week, said Aaron Keeler, Greystar senior director of development. The fifth, a landmarked property, will be preserved.

It is the latest in a crop of high-rise proposals in the neighborhood. A block to the north is where Landmark Properties has begun early construction work on a 1,550-bed, two-tower project.

The city rezoned the U District three years ago in anticipation of the 2021 opening of the U District light rail station, which is a block from the Greystar and Landmark sites.

Across the region, multifamily development continues apace despite the Covid-19 pandemic. The Lakeview tower is scheduled to be completed in 2022.

“Our thinking is Covid will no longer be the issue it is today,” Keeler said.

Greystar paid a total of $17 million for the five parcels. The landmarked property that will be preserved is the circa-1924 Villa Camini Apartments, at 1205 N.E. 42nd St. Saving the building allows Greystar to transfer the property’s development rights and add four more stories to the Lakeview tower, Keeler said.

Greystar’s tower will have a rock-climbing wall, but its rooftop will have study areas, Keeler said.

With its location near the light rail station and the Burke-Gilman Trail, the tower will have no resident parking. With parking stalls costing around $75,000 each, that’s a big savings.

Lakeview is Greystar’s second under-construction project in this part of Seattle. This spring it began building a high-end apartment development on a two-block site west of University Village.