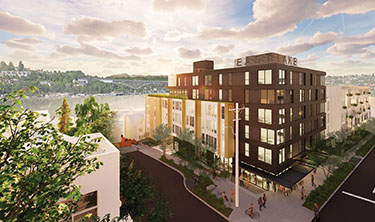 The 182-unit apartment building would have a 3,000-square-foot terrace overlooking Lake Union.

Washington Holdings and Meriwether Partners own the corner site, at East Louisa Street, via LLCs.

Carl Pollard is leading the development effort, with Hewitt as architect and landscape architect. Exxel Pacific is the general contractor

The basic program is unchanged: a five- to seven-story building with 182 units, two levels of underground parking with 99 stalls, and about 2,500 square feet of retail.

The old SPRAG building and a corner retail complex would be removed.

Because of the site’s split zoning, the building would step up in height from five stories at the dead end of Louisa to seven stories on the corner. Most of the facade on the slope down Eastlake will reach five stories. Parking will be accessed from Louisa.

Units would range from studios to two bedrooms. Some would have balconies and private terraces. A west-facing terrace for all tenants totals almost 3,000 square feet and would overlook Lake Union.

Excluding the parking, project size would to be around 140,000 square feet.