Eco-friendly Magnolia Safeway would have 138 units on top 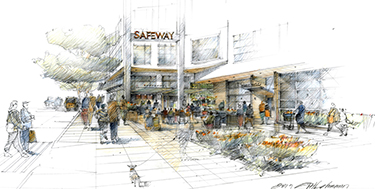 The building would have a 3,200-square-foot public plaza designed by Communita Atelier at the southwest corner that would include edible plants.

Farewell, Albertsons. Hello, Safeway. The two brands are owned by the same company, but will evidently switch at 2550 32nd Ave. W. in Magnolia, where Security Properties is planning 138 units on top of a new grocery store.

As the DJC first reported in March, Security Properties and Bumgardner Architects will redevelop the 41,200-square-foot midblock parcel, which faces Magnolia Community Center and is steps from Magnolia Village. The old Albertsons dates to 1955, and will be removed. Parent company Albertsons acquired the property in 1992 for $525,000, and Security Property says it’ll buy it — then presumably lease back the new store.

The old store now has around 19,000 square feet, with surface parking. The new store would have 29,500 square feet on the ground floor of the new building.

Though the site is now zoned up to 55 feet, the seven-story building will reach about 67 feet. That’s because it’ll participate in the city’s Living Building Pilot Program, which grants extra height and floor area in exchange for various green features. Developers can choose from a menu of green options (or “petals”). Those include features such as solar panels, water conservation and reuse, biophilic and holistic design, and super-efficient windows, appliances and heating.

Security Properties says this will be the city’s first mixed-use project to employ that program, which is not strictly accurate. The modular or “kit of parts” apartment tower planned at 303 Battery St. will have some retail — probably a coffee shop. But the Magnolia project would certainly be the first with such a large retail component like a grocery store. A handful of office projects are also using the program; and a few purely residential projects have done so, too.

Two levels of underground parking would have 205 stalls, along with 19 stalls at grade. All of that parking, for shoppers and residents, will be via a curb cut on 32nd. Trucks will load from the alley to the east.

Bumgardner’s preferred design pushes the building back toward the alley, then breaks the building into two slightly offset boxes, creating a public plaza on the southwest corner with about 3,200 square feet. The plaza’s landscaping, to be designed by Communita Atelier, will include edible plants and other references to the site’s early history, when it was a dairy farm next to a bog. Also, a midblock crosswalk with curb bulbs will lead to the weekly Magnolia Farmers’ Market across 32nd., which runs most Saturdays from June into October.

Security Properties’ John Marasco said in a statement, “We want the Magnolia community to be proud of this project and its potential to invigorate the Village, as well as provide a model for superior environmental stewardship.”

Nationally, in the low-margin and increasingly competitive grocery business, Albertsons has been selling many of its stores, generally preferring to redevelop those with better locations, and leasing back or closing the others. In Seattle, its University District and Upper Queen Anne Safeway stores are bound for redevelopment with apartments on top.