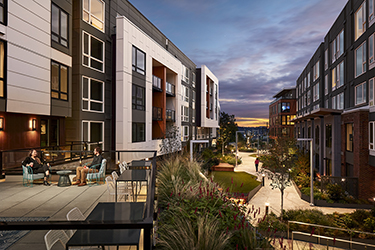 A number of Puget Sound developments recently were honored in the 2021 PCBC Gold Nugget Awards, which recognize projects that improve communities through exceptional concepts in design, planning and development.

Winners this year were chosen from 596 entries.

• Jackson at 2401 S. Jackson St. in Seattle’s Central area neighborhood won in the categories of best multifamily housing community – 100 units per acre or more, and multifamily community of the year – four stories and above. Vulcan Real Estate developed and Runberg Architecture Group designed the project, which has 532 apartments, retail and a 25,000-square-foot Amazon Fresh.

Judges said they were “taken in with the design’s intentionality, its cadence of small zones to expansive sweep of inclusiveness and intimacy, throughout the circulatory exterior and in interior spaces.” The project includes 107 units reserved for people whose incomes fall between 65% to 90% of area median income, which the judges called a “missing middle” offering. The site has landscaped open space, including a 12,000-square-foot public plaza and a mid-block open space aligned with a previously vacated street right-of-way, Runberg said in press materials.

• Arlington Drive Youth Campus in Tacoma won in the best supportive/transitional housing category. Tacoma Housing Authority developed and SMR Architects designed the campus for homeless youth and young adults. The judges called it a superior example of how housing can be combined with supportive services at a large scale and be a solution for young people in crisis. With design input from young adults, the 12-bed crisis center and accompanying 58-unit apartment building includes family-style and demonstration kitchens, dining areas, work/study areas, laundry facilities and thoughtfully designed indoor and outdoor amenity areas, the judges said.

• Solis, a 45-unit apartment development at 1300 E. Pike St. in Seattle, won in the multifamily/best design for energy efficiency category. Weber Thompson is the architect, landscape designer and interior designer on Solis, a seven-story building which also has retail space.

According to the architect’s website, Solis is the largest multifamily Passive House project in Washington. The judges said it achieves dramatic reductions in energy use – 50% below the U.S. multifamily median and scoring a perfect EnergyStar 100 – for a mere 5% above conventional construction (cost) by using conventional materials in innovative ways including pairing an enhanced building enclosure with a top-notch mechanical system for exceptionally comfortable and healthy units.

SolTerra is the developer and Cascade Built the builder. Decker Consulting Engineers is the civil engineer.

• WesternCedar, a 185-unit multifamily project planned for 2616 Western Ave. in Seattle’s Belltown neighborhood, won in the best on-the-boards multifamily community (100 units per acre or more) category. The project is participating in Seattle’s Living Building Pilot program. The judges lauded the integration of indoor/outdoor space and landscaped bioswale along the building edge that will bring daylight and nature into the lobby, the faceted angles of the building along Cedar Street oriented to capture views and the optimal solar orientation.

Saratoga Capital is the developer and GGLO is the architect, landscape designer and interior designer. The team includes KPFF Consulting Engineers, civil, and Exxel Pacific, builder.

• The Postmark in Shoreline won for best multifamily housing community (100 units per acre or more). The team includes The Wolff Co., developer, and Katerra, architect, interior designer and builder.