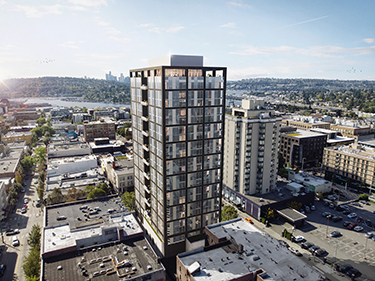 In this rendering, looking southwest, U District Station is hidden by the proposed B45 tower.

Cahill Equities of San Francisco owns the corner at 1300 N.E. 45th St. in the University District, where the old KeyBank will eventually be removed. With Runberg Architecture Group, the redevelopment plan is a 22-story tower with 342 units, retail and limited parking.

The plan is in administrative design review, with more details coming into public record. Barrientos Ryan is developing the B45 tower for Cahill. No general contractor is listed on the plans, though the developer lists Exxel Pacific on its website. Cahill, now with different arms, was established in 1911 as a builder.

Most of the apartments will be SEDUs (small efficiency dwelling units). Others will be large, ranging from two- to four-bedrooms, which would be suitable for student use.

Two levels of underground parking would have 53 stalls, to be accessed from the alley to the east. A retail bay on the corner would have 1,636 square feet; it’s labeled as Gathr Marketplace, possibly indicating some kind of deli. Or that could be a placeholder name.

The 22nd floor would have a roof deck with 5,751 square feet, plus a lounge and gym. Resident bike parking will total around 272 stalls.

Runberg estimates the total project size, including the parking, at 250,485 square feet. The Mandatory Housing Affordability fee is calculated at just under $4.8 million.