Journal Real Estate Editor
Hewitt is the architect and Exxel Pacific the contractor for the seven-story Mural Apartments in the Alaska Junction area of West Seattle.

Harbor Properties plans to build an approximately 200-unit apartment complex in a West Seattle neighborhood that the development firm sees morphing from commercial to residential.

A now-vacant former Huling Bros. auto service center at Southwest Alaska and 38th Avenue Southwest will be razed, as will an adjacent building, to make way for the six-story project.

The West Seattle Montessori School occupies the building on the adjacent site. Harbor said it is working with the school to have it relocated and then return as a tenant.

Seattle-based Harbor expects to start construction in early 2009. Baylis Architects is the architect.

Harbor is also building the Mural Apartments, a 136-unit mixed-use project, nearby at 42nd Avenue Southwest, between Southwest Alaska Street and Southwest Edmunds Street on a parcel formerly owned by the Seattle Monorail Project, according to Denny Onslow, executive vice president and chief development officer.

Both projects are in an area dotted with automobile-related businesses and surface parking. Harbor is looking to buy other properties in the area, Onslow said. The area is prime for mixed-use multifamily development, he said, since the Huling property is vacant, little existing housing would have to be razed, and zoning allows commercial and residential construction up to 65 feet.

“For the most part it’s pretty much of an open slate,” he said. “We just see this as a nice neighborhood that over time will grow.”

Both Harbor projects are near what’s known as the Alaska Junction — the intersection of California Avenue Southwest and Southwest Alaska Street — where there are shops and restaurants.

The area has another plus. King County Metro’s new West Seattle RapidRide service will begin in 2011 to provide frequent service via hybrid buses designed for fast boarding on Fauntleroy Way through the Alaska Junction to downtown Seattle, according to Rochelle Ogershok, a King County Department of Transportation spokeswoman.

Buses will run every 10 to 15 minutes during most of the day, she said.

The West Seattle Water Taxi to downtown also leaves from a dock in the area.

Onslow said Harbor is concerned about the impact of work on the Alaskan Way Viaduct. But he said he understands transportation officials are working to expand Spokane Street and add access ramps to surface streets that lead to downtown.

Onslow said Harbor believes the area will get more apartments and condos. Harbor’s projects are one of several under development in the Alaska Junction area, the firm said.

Hewitt is the architect and Exxel Pacific the contractor for the seven-story Mural. The project will have studios and one- and two-bedroom apartments. Some one-bedroom units will be designed with translucent sliding walls. Many units will have kitchens with European style cabinets running along a single wall to maximize space, Harbor said. The project will also have about 7,000 square feet of new landscaping, an entertainment lounge and a fitness center, and three car-share vehicles managed by Zipcar in the underground parking. 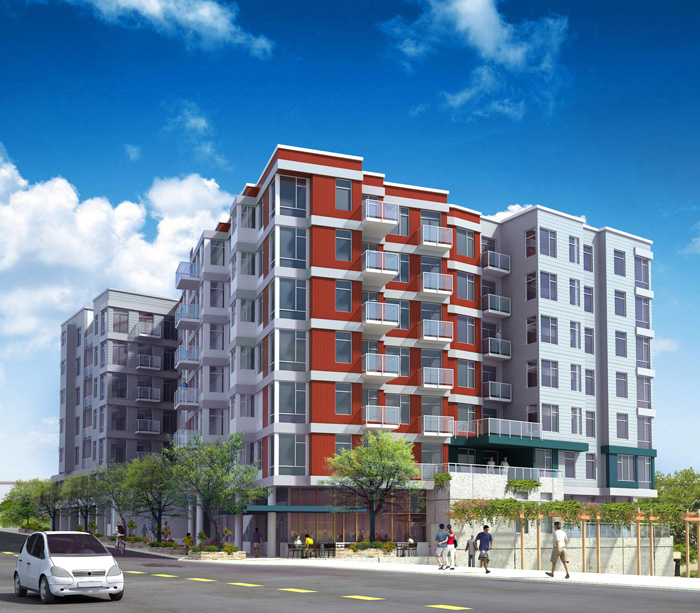