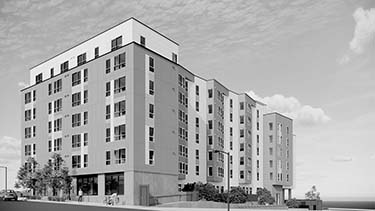 The project is LIHI’s second investment on Aurora; it’ll eventually develop another site to the north, for now a tiny house village, with new apartments.

What’s now called Nesbit Family Housing, which just broke ground at 8700 Aurora Ave. N., has changed names, addresses and architects since the affordable project emerged over two years ago. The Low Income Housing Institute is developing the former parking lot, which served as a tiny house village while the plans and funding came together.

Exxel Pacific is building the seven-story project, which will have 104 units over offices, services and amenity areas. The building was designed by PYATOK Architects, of Oakland, and Hewitt. May 2023 is the target for opening.

LIHI executive director Sharon Lee said in a statement, “We are proud to be a part of the beautification of Aurora Avenue. The neighborhood is served by high quality schools and access to recreation at Green Lake. The RapidRide E line and east-west buses makes this a very convenient location to live: One can make a quick trip south to downtown and east to the University District.”

Units will run from studios to three-bedrooms, ranging from around 440 to 849 square feet. Rents will be affordable to those earning up to 60% of area median income. The building will also have a children’s play area for families, plus a computer lab. Workforce families and some formerly homeless folks are expected to be among the future tenants.

Funding sources include the city’s Office of Housing, the state’s Housing Trust Fund and Washington State Housing Finance Commission, which arranged 4% tax credits and a tax exempt bonds issue worth up to $21 million, with Red Stone Equity Partners as the agent. Umpqua Bank provided the construction loan. LIHI estimates the total project budget is about $37 million.

Total project size is about 82,339 square feet. One surface parking stall can be used for loading. Tenants will have 112 bike stalls.

The 19,000-square foot midblock site is just south of Seattle Fabrics (on the corner of North 88th Street), and extends through the block to Nesbit Avenue North.