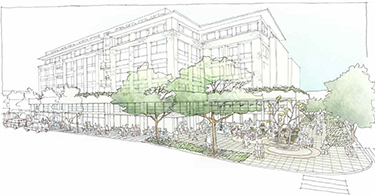 Barrientos Ryan and Runberg Architecture Group are proposing three interlocking buildings with courtyards. They would house a total of 322 apartments and a 50,000-square-foot store.

Redeveloping the Safeway at 2100 Queen Anne Ave N. has proven to be tricky for owner Albertsons. Community groups opposed the first two plans by Holland Partner Group and Wolff Co.

The idea, as before, is to put apartments on top of a new store and underground parking. Safeway/Albertsons has been taking this approach with its better locations in Magnolia, the University District, etc., and selling other store locations (sometimes leasing them back, sometimes closing for good).

It’s a large site: almost 1.7 acres, filling most of the block also bounded by Crockett and Boston streets and First Avenue North. Earlier designs were criticized for their mass and bulk.

To help alleviate that, Runberg is proposing three interlocking buildings with six and seven stories. They’d have 322 apartments over a new store with about 50,000 square feet — twice the current store, which dates to 1962. Courtyards would separate the buildings.

Units would range from studios to two-bedrooms. Some would be townhouse-style along First North, with separate entrances.

Total project size, including the parking, is about 468,000 square feet.

Hewitt is listed as the landscape architect, and Exxel Pacific as the general contractor. A new entity is now listed as the owner: QASW LLC, with its address at a local residence owned by Pat Cahill.

If the plan proceeds, the development could end up as a commercial condominium, with Albertsons owning the store. Or Cahill could lease the new space to the grocer.