On the Block: U District crane count stands at 2 — for now

On the Block: U District crane count stands at 2 — for now

There was a flurry of permits issued late last year in the University District, resulting in a bevy of active new construction sites. A recent stroll reveals more excavators than cranes, but that’s about to change. Light rail is coming next fall. Vaccines are coming this year. And students may be returning to normal in-person classes at the U-Dub next autumn. Developers are racing to house them — and post-graduate renters, too, who’ll enjoy a rail commute of under 15 minutes to downtown. 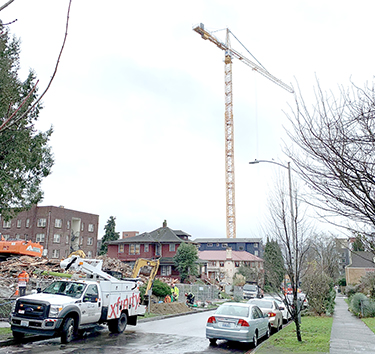 Looking down 12th, in the foreground (behind the cable truck): demolition for The Standard. In the background, behind the landmarked Villa Camini: Lakeview’s crane is up.

Greystar announced in November the onset of construction for its Lakeview student housing tower. The crane, operated by Morrow, is now up at 4126 12th Ave. N.E. Weber Thompson designed the 21-story, 226-unit project, which Exxel Pacific is building.

A few steps north, demolition is underway at Landmark Properties’ two-tower student housing project dubbed The Standard. The larger component of that project, at 4220 12th, is the two 25-story towers with about 402 units. The smaller east component, at 4215 Brooklyn Ave. N.E. hasn’t yet begun. That seven-story building will have about 24 units (or 90 beds, the standard metric in student housing). Ankrom Moisan Architects designed the project, which Katerra will build. No crane yet.

Just north of that, Brooklyn looks to be almost completely rebuilt and ready for vehicular and pedestrian traffic between Northeast 43rd and Northeast 45th streets. It’s been closed for years for the construction of U District Station. A new 13-story office building for the U.W. is planned above the station; permits for that are still pending. There, too, a crane will rise for the tower designed by Perkins and Will. LPC West is the developer, and GLY is the builder.

Just north of 45th, a pit is dug and a Morrow crane is up at 4215 Brooklyn. That’s Hub U District, which is being developed by Core Spaces. The 25-story tower will have about 211 units and 576 beds. Hartshorne Plunkard Architecture designed the project—which, in a change, is now being built by Treehouse Construction LLC. (Walsh Construction was listed on prior plans.)

Core Spaces and contractor Findorff, of Madison, Wisconsin, are also using a Treehouse JV for a another Hub-branded student housing project in Tucson. Here, Treehouse put out a required community outreach letter to neighbors regarding noise and disruption.

Northwest Construction and Kulchin Foundation Drilling Co. are also working on that job. Some construction documents also mention Katerra, whose role is unclear.

Nearby, Katerra built The M, which is now fully open and leasing at 4700 Brooklyn. The 24-story building is the tallest new structure in the U District in three decades. NBBJ was the architect for the 227-unit luxury student tower. (KeyBank has relocated to the new building from its now vacant and graffiti-covered old home on 45th, which is slated to become a 22-story tower with 342 units.)

And, just north of The M, Rhine has demolished almost all of the old Safeway. It’s being redeveloped by Fields Holdings, which through a related company also put up The M. There, the plan by Jackson Main Architecture is for an eight-story building with 180 units over a new Safeway. Katerra is again the builder.

Demolished over the summer on the nearby corner at 4731 15th Ave. N.E., University Christian Church is now a pit being excavated by Peak Campus, for what it calls Theory U District. That midrise project, designed by Ankrom Moisan, will have 171 units; Exxel Pacific is the builder.

No crane yet, but soon there will be a flock. The list above, plus a few unmentioned projects, should add seven new cranes to the two already swinging overhead.