Saturn Building opens, just across the street from the Fremont rocket

Current listings start at $456 a month, including heat and electricity. Many of the walls aren’t structural so smaller offices can be combined into spaces up to 5,000 square feet.

If you’re putting up a building in a place that bills itself as the Center of the Universe, you may as well go with a celestial theme.

Developer Brian Regan, president of Equinox Properties Corp., followed that reasoning when he built a five-story, 49,000-square-foot office and retail building in Fremont that he decided to call the Saturn Building.

The address is 3417 Evanston Ave. N., across the street from the Fremont rocket.

Regan said he’s planning to put a 24-foot-diameter model of the ringed planet atop his new building, which opened in September. The installation will be made of fiberglass and supported by a steel structure. He expects permitting to take another six months or so.

Regan’s plans for the building date back to 2007. Financing dried up as the real estate market crashed, and that was that for a while, he said.

Regan then worked on a hotel concept for the site, but couldn’t line up financing for that either. The site’s industrial zoning wouldn’t allow apartments.

So he returned to the original plan — a speculative office building with ground-floor retail — and finally succeeded with financing.

The building’s 39,000 square feet of offices is partitioned into spaces as small as 152 square feet that appeal to solo tenants such as lawyers, psychologists, accountants and massage therapists.

Current listings start at $456 a month, including heat and electricity. Offices are equipped with operable windows, and hook-ups for a sink as well as cable and Ethernet.

Many of the walls aren’t structural, which allows smaller offices to be combined into spaces up to 5,000 square feet for larger tenants such as technology companies or health-care businesses.

A number of office spaces have been leased, Regan said, and he expects it will take a year to fill. One tenant has taken half a floor.

The 10,000 square feet of ground-floor retail is fully leased, with HomeStreet Bank, Wine Tea Chocolate cafe and a bar called the Sixgill.

There are two levels of underground parking for about 90 vehicles.

Lance Mueller and Associates was the architect and Exxel Pacific was the general contractor.

Regan said he’s been in the development business for 35 years. He has other buildings similar in format to the Saturn Building, including Fremont Space and Queen Anne Space.

Speculative office projects face uncertain demand, he said, and it’s hard to know how deep the tenant pool will be when they are completed.

Still, “I’m looking to build quite a few more of this type of building where markets will bear it,” he said.

He declined to discuss how he selects locations.

Regan said he’d like to build other mixed-use buildings, and is considering projects in other West Coast cities. 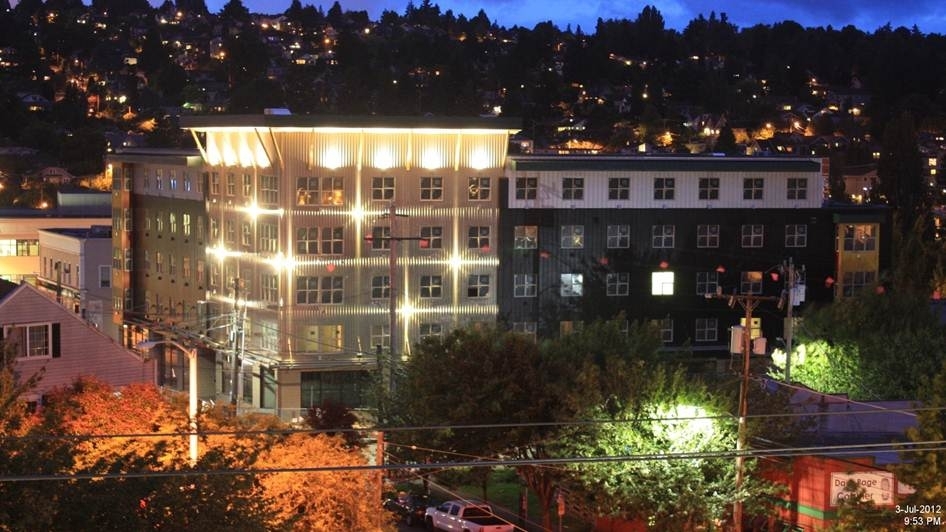