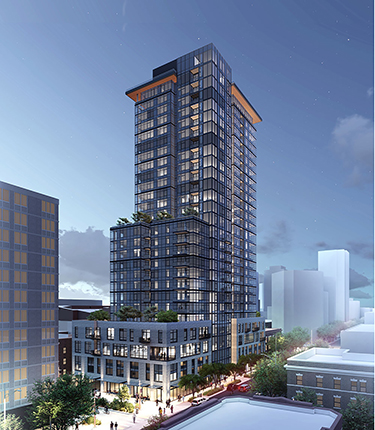 Rendering by VIA Architecture [enlarge]

This view looks northwest at the planned apartments; no start date has been announced.

The Two Bells Tavern closed in 2017. Security Properties recently demolished that and a neighboring building to make way for its planned high-rise apartment building at 2315 Fourth Ave., on the corner of Bell Street. (The old project address was 314 Bell.)

(Update: Exxel Pacific now says it will build the project. )No start date has been announced for what VIA Architecture calls Belltown 36, which received its master use permit last September. Security Properties has applied for phased construction permits.

The general plan is for a 29-story tower with about 212 units, plus parking, retail and some offices.

Security Properties assembled the Belltown property for almost $17 million during 2017-2018, via SP Jade I LLC. Jade, or Jade Century Properties, lists itself as a co-owner of the project. Jade has a New York office associated with parent Beijing Jade Investment Group.

At Belltown 36, units would range from studios to three-bedroom layouts. Residences would begin on the fifth floor, with a setback above that podium level to create private terraces on the sixth floor. There’d be another terrace and gym on the 15th floor, plus a lounge and small theater. A few residences on that level would continue through the 28th floor. The 29th floor would be all amenities and terraces.

About 225 parking stalls would be distributed on two structured and four underground levels, to be accessed from the alley to the west.

Also planned are 8,465 square feet of ground-floor retail, and 18,191 square feet of offices on the fourth floor — above the two structured parking levels.

Total project size is around 374,000 square feet, parking included, and the Mandatory Housing Affordability fee is calculated at slightly under $4.5 million.

Jade says it has other projects in Queens, Anaheim, San Francisco and Portland. The latter is the phased, mixed-use redevelopment of a nearly 5-acre former Pepsi plant, also with Security Properties. Mithun is the architect for what’s generally called the Pepsi Blocks, with a master plan that could eventually yield over 1,000 units, 450,000 square feet of offices and 30,000 square feet of retail. Jade and Security Properties acquired the plant in 2017 for an unknown amount.