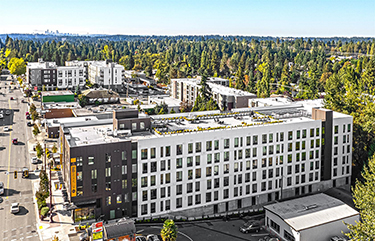 The project was Evergreen Point’s first in Shoreline, with a second to follow.

Imagine an umlaut on the lower-case a: The new TRaD, at 17567 15th Ave NE in Shoreline, has sold for over $50.7 million. King County recorded the sale last week.

Brokers were not announced. The deal was worth about $409,290 per unit. The leasing status and rents are unknown; the old marketing website disappeared about the same time as the sale — so management may be changing.

Trad has two levels of mostly underground parking with 107 stalls. No commercial space is included. There is a gym and rooftop deck. Caron lists the size above grade at 180,000 square feet.

The contractor says the project replaced old buildings including a gas station, and that soil remediation was required. The site is east of Interstate 5, on a commercial strip of 15th that has a Safeway and other retail within walking distance. Some might call that neighborhood North City; it’s close to Lake Forest Park.

The seller says that trad — again, with an umlaut — is the Swedish word for tree. Its prior projects have included the fairly recent 154-unit Cerasa in downtown Bellevue; and the older 80-unit Park Metro, also in Bellevue.

Evergreen has also taken a $4 million, 1-acre land position just west of Interstate 5 and the future Shoreline South/148th Station. There, it’s planning The Line, with 238 units. The light rail station will open in 2024, on the line north to Lynnwood. (Update: Tiscareno Associates is the architect.)