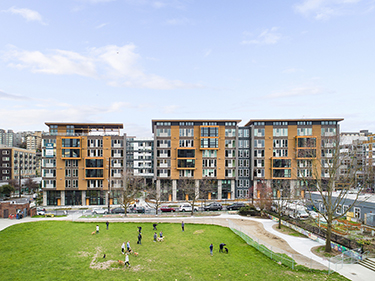 The Sitka apartments were recognized for their innovative energy design. The Vulcan Real Estate project is in South Lake Union.

There were over 600 entries from around the world. The winners are at https://tinyurl.com/y67sqnhu/.

According to a Runberg press release, it uses cutting-edge technology such as a wastewater heat recovery system to make it one of the most sustainable and energy-efficient multifamily buildings in the region. It achieved LEED Platinum certification and is on track to achieve ambitious local 2030 targets including major reductions in water and energy use, the architect said.

Firm principal Brian Runberg said: “Sitka represents a significant milestone in the advancement of innovative sustainable strategies requiredÂ to achieve this level of efficiency (16 EUI) for market-rate housing in the United States.”

EUI, or energy use intensity, is the measurement of a building’s annual energy consumption relative to its gross square footage.

Another Runberg project won for best on the boards multifamily community. Capstone Development is developing the 634-unit Esterra Park Apartments at 2808 Calder Ave. N.E. in Redmond.

Runberg said it transformed the site’s grade into a feature, with the stepping of building massing echoing the natural landforms and patterns in the SammamishÂ Valley. The project has two courtyards, twoÂ rooftop decks and a central mews outside and a co-working space, gym, spaÂ and bike shop inside.