Last week was opening night for Vulcan Real Estate’s latest project: The Martin, a 24-story apartment tower next to Seattle Cinerama at Fifth and Lenora. It seems to be a hit, with 40 percent of the units leased.

The 188 units look more like condos than the other apartments being built around town these days. Megan Murphy, residential marketing manager at Vulcan, said the units are about 200 square feet larger than the competition.

It’s easy to see the influence of Seattle’s theatrical history throughout The Martin. On every floor near the elevator doors is a picture of a theater, either historic or current. We learned it’s pretty tough to tell the difference between The Moore of today and The Moore of yesterday. Even the unit numbers on each apartment door have theater-inspired art.

An installation by California artist Ned Kahn surrounds the above-grade garage with 10,280 perforated stainless steel panels that sway in a breeze.

Vulcan got the land in the mid 1990s. Back then it appeared the Cinerama — which was called the Martin Cinerama when it opened in 1963 — might see its final curtain, so Paul Allen stepped up and bought it along with an adjacent parking lot where The Martin now stands.

The Martin was planned as condos, but that project got shelved when the recession took hold before being revived in 2011 as apartments.

Planning for most of these projects started before Amazon.com announced it will build a 3.3 million square-foot headquarters there.

Vulcan’s real estate investment strategy director, Lori Mason Curran, called Amazon “Seattle’s success story.” All the new housing and office development have turned Denny Triangle from something of a no-man’s land into one of the country’s hottest neighborhoods.

The Martin is another sign that Seattle is “growing up,” Mason Curran said. In the old days, developers built office towers like 1201 Third Avenue and Columbia Center but not high-rise housing. The condo towers built before the recession and high-rise apartments like The Martin and Via6 show how much the housing market here has changed, Mason Curran said.

Murphy said she doesn’t see the other apartment complexes coming to the neighborhood as competition. Via6 has smaller units and a ground floor filled with Tom Douglas creations that give the building an energetic, communal vibe, she said. The Martin offers an alternative for people who want bigger units and a quieter atmosphere.

This doesn’t mean The Martin is dull. The top floors have multiple gathering spaces for parties. On the roof is a deck with lounging areas, an outdoor fire place and a P-Patch managed by a local farmer.

One floor down is a common room with a chef-style kitchen, pool table, a gym and media room. There’s also an outdoor lounge on that level with heat lamps and barbecues. On the sixth floor is a dog spa.

All these amenities give residents a way to connect with people outside their apartments, just like at Via6.

“That way everyone can enjoy the gorgeous views, not just the people living on the top floors,” Murphy said.

Residents are also starting to move into another Vulcan apartment project: the second building in Stack House in South Lake Union. The first building in the seven-story, 278-unit complex opened in August.

With all the fuss about tech companies these days, it’s easy to forget what big players law firms are in the Seattle real estate scene. And while tech companies have been growing rapidly over the last few years, law firms mostly have been stagnant or shrinking.

The real estate brokerage Jones Lang LaSalle says as the U.S. economy picks up steam, some law firms are being left behind. New office development is pushing rents up nationwide, making it hard for law firms that aren’t bringing in more money.

But law firms are finding ways to adjust. In its Law Firm Perspective, Jones Lang LaSalle says some can get by with less space thanks in part to technological improvements.

“The digitalization of the workplace has radically reduced the need for law libraries, filing on practice floors and in many cases additional filing on the concourse or basement levels of office buildings,” the report says.

And like tech companies, law firms also are packing more people into smaller spaces. The standard was about 900 square feet per lawyer, but that has shrunk to 550 square feet in new buildings, and between 650 and 750 square feet elsewhere.

Some law firms are even starting to go with open floors — just like creative companies. But this is a slow transition, the report says, as some firms are hesitant to move attorneys out of their large, window offices.

Seattle’s rising rents are forcing law firms to compete with tech companies for space in the north end of the central business district. Over the last few years, most local law firms decreased their space. This year they have been renewing leases and even expanding in some cases.

The report says law firms occupy 13.8 percent of Class A office space in Seattle, and 5.6 percent of tenants looking for new space. The report indicates that law firms will be looking at a landlords’ market through at least 2017. But landlords tend to like the more traditional long-term leases with a law firm, in contrast to tech companies, for whom one year may be a long time.

The report says there are large blocks of space available in the south end of the CBD at lower rents. These spaces could be a good place for law firms to lock in attractive long-term leases. 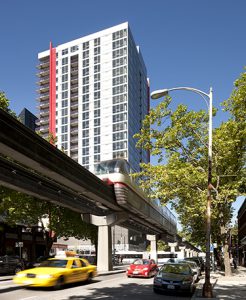