The $15 million project is at 401 E. Pike St., across the street from the school’s main building. The two-story building and basement will house a full-court gymnasium, two-tiered cafeteria and dining room, a 175-seat black-box theater, a rooftop sports field with overhead netting, and a “sky lab” that can be used for outdoor science classes.

The school says competition is fierce for fields in Seattle, and having its own field will reduce the need to transport students for PE classes and team practices. The 60-by-100-foot synthetic turf field will have fencing around the perimeter and netting above to contain errant balls and Frisbees.

Exxel Pacific is the general contractor building the concrete and steel structure designed by Mithun. KPFF Consulting Engineers is the structural engineer and the Warren Co. is project manager.

Work began last November and is expected to be finished in January 2014.

The Northwest School is an independent college preparatory school that serves 480 students in grades 6-12. 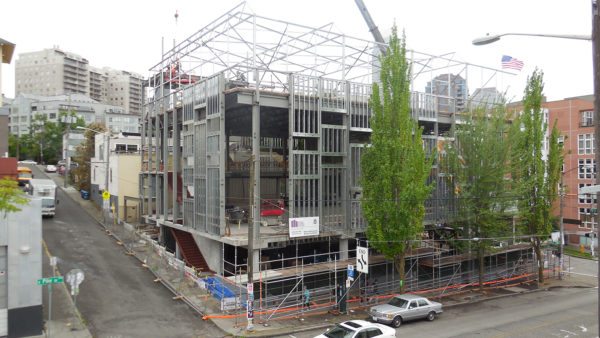