Another student housing project debuts in U District 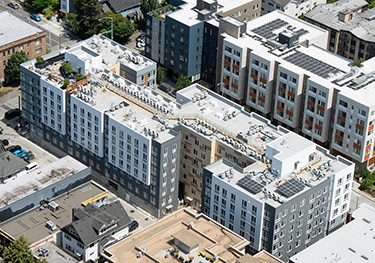 This perspective looks northeast at Theory U District, which replaced University Christian Church. East across the street is Bellwether Housing’s Arbora Court, also developed on land once owned by UCC.

PeakMade Real Estate broke ground on what it now calls Theory U District in late 2020, not long after demolishing University Christian Church. The Atlanta-based developer recently announced that the midrise project at 4759 15th Ave. N.E. opened in September — right in time to begin leasing to students.

Jeff Githens leads PeakMade’s development arm, and said in a statement, “We are very excited to be a part of the U District community, and to serve the growing housing needs of University of Washington students with a well-conceived project.”

Photos from the general contractor, Exxel Pacific, indicate that the 171-unit, six- to seven-story building was substantially complete in June. The temporary certificate of occupancy came in August. Ankrom Moisan was the architect.

During the course of construction, the developer changed names, retiring the separate old Peak Campus and PeakMade Communities monikers.

Beds, not units, are the standard metric in student housing, and Theory has 441 beds. Its apartments range from studios to five-bedroom suites. Rents start at around $1,150 per month in a shared suite. A private studio with around 350 square feet goes for $1,950 per month. One month’s free rent is now being offered as an incentive to young tenants.

Theory is the relatively new student housing brand for partnerships between Blue Vista and PeakMade. Jason Schwartz has leadership roles at both companies, and said, “Theory U District represents the fifth Theory-branded development. The Theory brand offers residents what we believe to be an ideal combination of the student housing experience and modern apartment living, with high quality amenities, well-conceived community spaces and easy access to campus.”

Indeed, the corner location at Northeast 50th Street is a short walk to the UW, shops, restaurants and U District Station.

PeakMade lists a portfolio under management of some 245 properties with over 126,000 beds. Over 30 of those buildings represent its own development efforts.

With its membership in decline and facing the high cost of maintaining an aging building, UCC sold its longtime home in late 2019 for $17.7 million and merged with Lake City Christian Church. UCC was founded in 1890, moved a few times, then opened its final University District location in 1928. Robert Hall Orr (1873-1964) designed that Gothic revival structure.