U District tower project ready to apply for building permit

U District tower project ready to apply for building permit 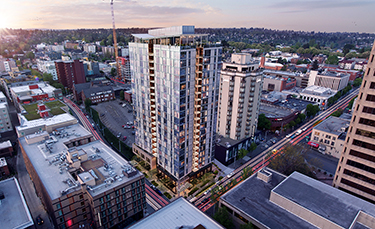 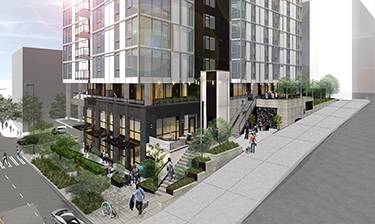 A three-story commercial plaza with an elevator will wrap from 45th up along the alley.

The developer of a 24-story apartment tower at 1200 N.E. 45th St. in Seattle’s University District plans to submit for a building permit in October, but construction is not yet scheduled, the architect said.

In a press release, Runberg Architecture Group said the building will have 237 market-rate and affordable workforce apartments, including studio, one- and two- bedroom units.

Tenants will have a rooftop deck above the 22nd story, a lobby lounge, fitness center, bicycle room, dog run and dog lounge, media and conference rooms, and a common amenity room adjacent to the deck.

Runberg said the project plans to pursue the city’s multifamily tax exemption program. That program provides a tax exemption on new multifamily buildings in exchange for setting aside 20-25% of the homes as income- and rent-restricted. Also, to make rents more affordable, many of the units are being kept small and the building will include small efficiency dwelling units, the architect said.

The site is within a block of the new University District light rail station, scheduled to open in 2021.

MRM 1200 Development LLC, which is associated MRM Capital, bought the property — the Washington Federal bank building — in late 2018 for $10.8 million, according to King County records. It added a small adjoining alley-side parcel in 2019 for $840,000. MRM Capital is the investment office for the Razore family.

Runberg listed Barrientos Ryan as the tower’s developer and MRM 1200 Development LLC as the client but did not specify who owns the project.

In this case, the open space improvements connect to the newly approved HUB U District luxury student housing tower project on the opposite side of the alley at mid-block, and Touchstone’s proposed office building on the north side. Runberg said concentrating the open space along the alley is particularly important as a significant alley grade at the south end lends itself to three levels of hill climb.

Runberg said a Seattle review board has approved its design for the project.