Velo will have 171 units — including townhouses and live-work spaces — as well as a conference space like those found at Google or Amazon.

The project is called Velo, which is French for bicycle, and the building is designed to live up to the name.

T.J. Lehman, development manager at Harbor Urban, said many features were designed with bike riders in mind, such as bike storage and maintenance areas. There is even a place to keep bikes in the actual units.

Much of the art work will be dedicated to bikes, and the lobby floor will be able to handle wet and dirty bike tires rolling through.

The site is just a few blocks from the Burke Gilman Trail.

Velo will also appeal to creative types who like to take meetings close to home, with a 900-square-foot conference space that Jim Atkins, managing director at Harbor Urban, says will be unlike any other meeting space in an apartment building.

“We are designing a conference room that you would see at Google or Amazon,” Atkins said. “Seattle is a city of entrepreneurs, and we wanted to include a creative space that residents can use for informal meetings or a business summit with employees or clients.”

Once the work day is done, residents can play on the roof-top deck, which has indoor and outdoor spaces as well as a P-Patch.

Residents can start moving in by the end of next year, and completion is expected in 2015.

There will be a mix of apartments, live-work spaces and townhouses.

Baylis Architects designed the project and Exxel Pacific is the general contractor. The Carlyle Group of Washington, D.C., is Harbor Urban’s financial partner.

Harbor Urban wants to break ground on another Fremont apartment project this fall at 3636 Stone Way N. The 135-unit, four-story building is named Ray, a reference to Fremont’s moniker as the “Center of the Universe.” Lehman said Ray will have a brightly colored, Southern California-style facade, and on the roof will be a professionally managed greenhouse growing tropical fruit.

“It’s a room that is warmer, and you can go up and smell the oranges in February,” Lehman said. “It’s not the kinds of foods you see being produced around here.”

Harbor Urban also is working with Baylis and Exxel Pacific on Ray.

The developer has been busy this year. It sold two apartment complexes — Landes on First Hill and Alto in Belltown — for a total of $91.2 million, and is planning or constructing several other projects:

• A 150-unit building at 1321 N. 45th St. Harbor Urban has not submitted a master use permit application for this project.

• A 260-unit complex at 6718 Eighth Ave. N. in Roosevelt. Harbor Urban has not submitted a master use permit application for this project, but it had an early design review meeting.

• Construction continues on Viktoria, a 24-story tower at 1915 Second Ave. Harbor Urban is working with Goodman Real Estate, along with Capri Capital Partners and Real Estate Capital Partners. The project is expected to be completed early next year.

Harbor Urban representatives said they expect to announce another project later this week. The company also owns a parking lot at University Street and Western Avenue near the waterfront. 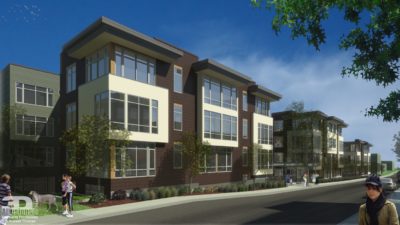