Harbor Urban has big plans for 2013

Harbor Urban has a busy year ahead with eight projects in the pipeline and a new business partner.

The development company said it is teaming with the Carlyle Group, a Washington D.C.-based global investment and asset manager, on at least two apartment projects in Fremont.

A building at 3606 Woodlawn Ave. N. will have 171 units over four stories, including four live-work units and 11 townhomes. Construction is planned to begin before the summer, with completion expected by the end of 2014.

Baylis Architects will design the project. ObjectSpace is handling interior design and Amy Arroyo of Arroyo Interior Design is working on the project as well. Exxel Pacific is the general contractor.

Harbor Urban is planning another four-story project at 3636 Stone Way with 138 units and 3,000 square feet of ground floor retail. T.J. Lehman, development director at Harbor Urban, said this project is still early in the process and a team has not been selected. Construction is expected to begin at the end of the year, or early 2014 with expected completion in 2015.

Lehman said the 3606 Woodlawn project is geared to outdoor enthusiasts. When Harbor Urban undertakes a project they create a profile of a potential renter, known as Customer Zero. In this case, Customer Zero is a healthy person who likes a walkable neighborhood. He shops at upscale grocery stores such as PCC and Whole Foods. He frequents local restaurants and wants to work near home. This person is technologically savvy and entrepreneurial. Lehman said the building’s look, layout and amenities are designed with this person in mind.

Amenities include a p-patch, a gym, bicycle washing and maintenance areas and bicycle storage lockers.

It will have a rooftop deck with both indoor and outdoor spaces, making it useful year-round.

Lehman said the unique feature is a conference room he dubbed the “work from home” room. The room has integrated technology and can be used for everything from informal meetings to a business summit with employees or clients. Exact details of the technological features are still being designed, Lehman said.

Lehman said Harbor Urban blended the vibrant nature of Fremont with the peaceful residential feel of Wallingford for this project. He said the location embodies both neighborhoods well.

“We think it is going to be a great street in the future,” he said. “What we need there is great retail. What you need for great retail is you need heads in beds.”

Jim Atkins, managing director at Harbor Urban, said this project will not be the last it does with Carlyle. Carlyle Managing Director Paul Brady said in a statement that he was excited about the job growth and apartment boom happening in Seattle. The organization chose to partner with Harbor Urban because of its focus on “hyper local” housing.

Since Harbor Urban came together last year through a merger of Harbor Properties and Urban Partners it has completed more than 360 units and broke ground on two other apartment projects. The company also sold four complexes for $360 million. Lehman said Harbor Urban is planning six more projects. 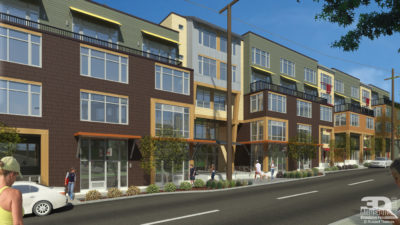