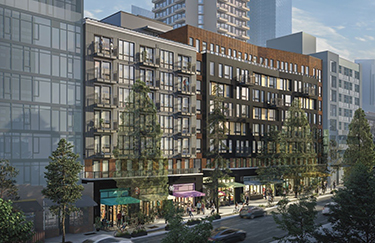 In this view, looking east, the building at right represents a hypothetical addition to the landmarked Mama’s Mexican Kitchen building, on the corner of Bell Street. That project has been mostly dormant for years.

The decrepit old Wayne Apartments, at 2224 Second Ave. in Belltown, were controversially landmarked in 2015. However, no controls were subsequently placed on the over century-old complex, and a demolition permit is in process by prospective buyer Liv Communities of Michigan.

The proposed eight-story, 180-unit replacement project has also moved closer to a master use permit, as the city this week issued a SEPA determination of non-significance. The plan, by Ankrom Moisan Architects, has passed through design review. Exxel Pacific is now listed as the general contractor. Paragon Real Estate Advisors is selling the midblock assemblage, which also includes some other old low-rise buildings.

Ground-floor retail/commercial space will total about 9,000 square feet. Two levels of underground parking, with 92 stalls, will be accessed from the alley to the east. Some units will have terraces or balconies.

Total project size is about 171,000 square feet, including the parking and decks on the roof and eighth floor. The Mandatory Housing Affordability fee hasn’t yet been calculated; or the developer could opt to include some affordable units.

No start date has been announced, and Liv doesn’t list the project on its website. The private firm’s portfolio is now seven communities in Michigan and Arizona. It also develops senior housing.