Exxel built a dewatering system to treat the site, which sits atop a shallow groundwater aquifer.

Allez is a 147-unit residential and retail development in downtown Redmond.

The site is situated adjacent to the Sammamish River, atop Redmond’s shallow groundwater aquifer, making erosion-control and dewatering planning critical. By working closely with its consultants, Exxel was able to implement an effective dewatering system with minimal cost to its client.

Due to the project’s design, proper fall protection was a challenge for the project team. Rolling scaffold towers and the construction of a large “dance floor” scaffold provided a safe work platform.

The project had no time-loss or recordable injuries. One worker did suffer a heart attack, but the project team was well-prepared and worked perfectly in notifying local EMTs. The fire department captain said that he had never seen such a well-planned and executed response, and that he was certain that was reason for the worker’s survival. The worker is doing well today.

All of the project’s completion dates and goals were met, including occupancies, tenant move-in commitments and Built Green three-star certification. Through monitored budget controls, Exxel was also able to return over $300,000 in savings to the owner.

Allez was also honored as the winner of a 2014 Built Green Hammer Award and was a finalist for NAIOP development of the year. 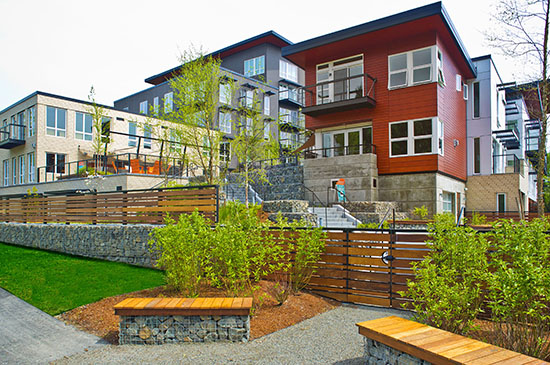