N.J. company pays $62M for the Alto in Belltown

This is Hartz Mountain’s first purchase on the West Coast.

Hartz Mountain representatives said they like to focus on buildings that honor artists. Harbor Urban named it Alto because the site was once home to the Musician’s Association of Seattle.

The building has other musical aspects. According to Alto’s website, there is a 1,500-square-foot penthouse lounge where residents can connect to a music system using smartphones and tablets. Residents also get subscriptions to Pandora One, the commercial-free version of Pandora Internet Radio.

Jim Atkins, managing director at Harbor Urban, said in a statement that the company plans to reinvest the sale proceeds in other Seattle projects.

“I view the sale as another vote of confidence for downtown living,” Atkins said. “There are a lot of respected real estate investment firms trying to find properties in urban settings and Seattle is seen as a strong market.”

Hewitt designed the building, and Exxel Pacific Construction built it.

Since 2010 Hartz Mountain has bought or built nearly 4,000 units. It owns more than 200 properties and 38 million square feet of space, primarily in New York and New Jersey. 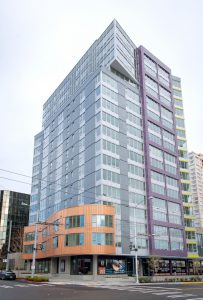