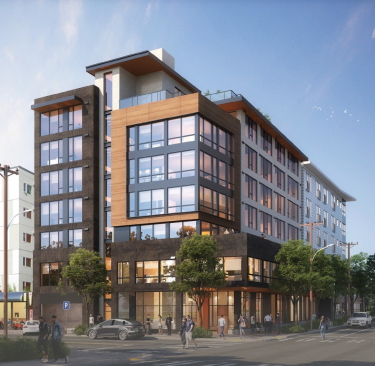 This view looks northwest at the planned apartment building, which will have its companion on the east side of 20th.

Two years ago, Saratoga Capital bought the corner property at 2002 N.W. 56th St. with a master-user permit already in place. It’s the west of two roughly facing apartment projects the California developer has planned in Ballard, both designed by GGLO.

The west project, now dubbed 56th Ballard, had secured its MUP under a different developer and architect. That was before the land sale. Now GGLO’s seven-story, 51-unit plan has gained design approval from the city.

Four of the 51 apartments will be live/work units. No commercial space is planned. Almost all units are indicated as one-bedrooms, in a range between 407 and 772 square feet. A roof deck is also indicated.

Up to 25 parking stalls are planned on one underground level; stacked parking will be employed for some stalls. A bike room is also indicated.

Total project size, including the parking is estimated at 47,052 square feet. The Mandatory Housing Affordability payment hasn’t yet been calculated. No demolition permit application has been made yet for an old commercial building that was last home to a pilates studio.

All those same parties overlap with 57th Ballard, at 1761 N.W. 57th St., which is east across 20th Avenue Northwest. No permits have been issued yet for that seven-story, 80-unit project.

Saratoga and GGLO are also collaborating on an 18-story, 182-unit apartment tower in Belltown; and on an unspecified five-story replacement of the Fremont Heated Storage on North Queen Anne, near the Fremont Bridge.