Invesco Real Estate is at it again.

Less than a month after spending $308 million on The Bravern Signature Residences, property records show an entity related to the real estate arm of Atlanta-based Invesco paid $41.2 million for 206 Bell, an eight-story apartment building at Second and Bell.

The investment management company paid a record $676,523 per unit when it bought The Bravern apartments from Schnitzer West last month.

The seller of 206 Bell was HB Management, led by Jon Breiner and Ed Hewson. The building opened in June. Hewitt designed it and Exxel Pacific was the general contractor.

HB bought the land for 206 Bell in 2008 for $4.62 million. It bought several other parcels during the recession with plans to develop them when the market picked up again. The Second and Bell project was the first one out of the ground for HB.

HB started construction earlier this year on a 161-unit project at Fourth and Denny.

HB also bought a site at Third and Cedar and sold it to Wood Partners, which is building a 27-story, 298-unit project there. Completion is set for next summer.

Invesco Real Estate’s website says it has bought a total of 19 office, industrial, apartment, retail and hotel properties in Texas, New York, California, Georgia, Illinois and Florida since the start of the year. 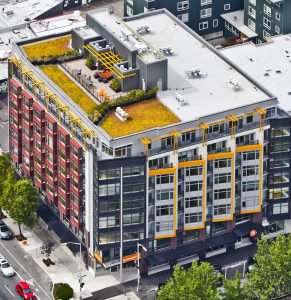