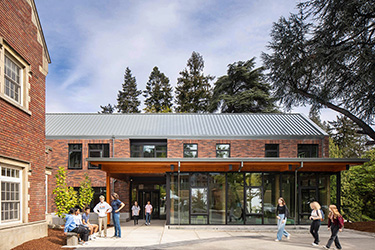 This school year, students in the Bush School’s Upper School are taking classes in the first passive house school building to be completed in the state. The new upper school was finished in May and took approximately 18 months to build. It is designed by Mithun and built by Exxel Pacific.

The above grade structure was built using a mass plywood panel structural system which reduced embodied carbon and optimized efficiency. Mass plywood panels and glulam beams are on full display throughout the learning spaces bringing biophilic health benefits to occupants. A heavy-timber stairway leads from the basement level to each of the two primary learning levels. These levels also have wood clad corridors, benches and desks to encourage healthy learning and large windows that maximize natural light and provide views of surrounding trees and Lake Washington. 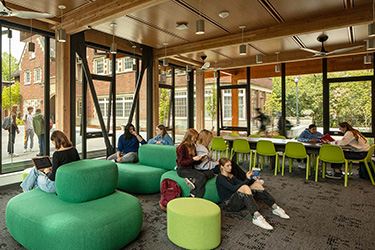 This project was the first time Exxel Pacific worked with MPP. “Mass plywood was a great product to work with. From the reliable supply from Freres Engineered Wood, to installation on the jobsite, everything about it was quick and easy. It’s a sustainable product and has the ability to do large spans with a nice finish as well that can be the final finish if desired,” John Hughes, project director at Exxel Pacific said.

Further features that contribute to the building being net zero include two large on-site solar arrays that produce the same amount of energy as the building uses and energy-efficient mechanical systems.

The upper school is the first passive house school on the West Coast, one of the first net zero energy schools in the nation and the first K-12 school to be salmon safe certified.

In addition to these sustainable features, Mithun said the new school was designed to be a cohesive addition to the campus fabric and in particular to the adjacent Gracemont building, which was built in 1924. Both the new upper school building and Gracemont Hall are timber-framed and have charming brick facades.

“From the outset of design, the Bush School prioritized the idea of this project having positive impact beyond the campus boundaries, and to tell the story of a kindred relationship of a next generation high performance net zero and passive house timber-frame learning facility adjacent to and supporting the historic wood-framed Gracemont Hall, which was the origin point of the school in 1924. This new structure is carefully inserted on the upper campus to frame and honor this older structure and adjacent exceptional trees, and also to provide needed accessibility to the elevated upper campus, with two front doors that bridge formerly inaccessible slopes. In the end, it is a reflection of the balance of equity, innovation and tradition that will hopefully inspire broader change in our urban built environment,” Mithun design partner, Brendan Connolly, explained.