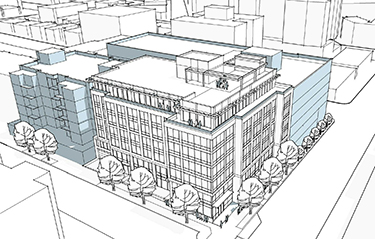 The 80-unit plan includes a roof deck and a small commercial space on the corner, at Northwest 57th Street and 20th Avenue Northwest.

Saratoga Capital owns two nearby corner sites in Ballard, with apartment buildings planned for both. GGLO is designing the new buildings.

The west site has a master use permit, and is farther along in the review process. It’ll probably break ground first.

The east site, at 1761 N.W. 57th St., is now in administrative design review. The design and particulars are now coming into focus. 57th Ballard, as it’s called, looks like this: a seven-story building with 80 units and one level of underground parking. The latter will employ stacked parking to reach 44 stalls. A tenant bike room will have 96 stalls.

Units will all be one- and two-bedroom apartments. The Mandatory Housing Affordability payment is calculated at $1,107,487.

Saratoga’s second corner site is west across 20th Avenue Northwest, at 2002 N.W. 56th St. There the plan for 56th Ballard is a seven-story building with 51 units and 25 underground parking stalls. KPFF is also on that job; the general contractor isn’t listed yet.