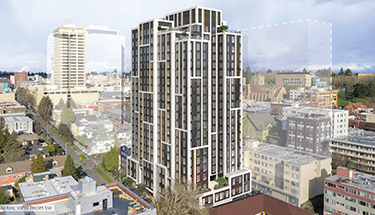 Lakeview will have nearly 600 student beds in a tower near U District Station.

The century-old Villa Camini apartments will be preserved.

Greystar has closed on multiple University District properties that will underlie its 21-story Lakeview student housing tower at 4126 12th Ave. N.E., near the future light rail station. King County recorded the five sales last week; they add up to about $19.6 million.

The Colliers team of Tim McKay, Dan Chhan, Sam Wayne and Matt Kemper assembled the offering, and brokered both sides of the deal. That sale also included the recently landmarked, century-old Villa Camini apartments, which Greystar will preserve. That two-story, Mediterranean Revival-style building, on the corner of Northeast 42nd Street, has seven units. (Its development rights will be transferred to the 235-foot-tall tower, which was designed by Weber Thompson.)

A little south of that, on Greystar’s midblock site, four old rooming houses and apartment buildings will be removed. Colliers says that component of the deal works out to about $950 per square foot for the land.

Total project size is about 227,000 square feet. The Mandatory Housing Affordability Payment is estimated at just under $5 million.

About 226 units are planned; the actual number of beds — the standard metric in student housing — will be around 597. Bike rooms will have around 180 stalls. There will be no parking. Lakeview, when completed in about two years, will be a block south of U District Station, where light-rail service will begin next fall.

Tenant amenities at Lakeview will include terraces near the roof, study areas, an entertainment lounge and rock-climbing wall.