When Alan Winningham bought his Belltown condo he requested that it come as is, just the shell.

Then he and his partner created a home that combines high design and functionality. Room dividers also act as furniture and storage. Some walls move so that rooms can transform into other uses. Liberal use of glass gives a sense of lightness.

“I got great reaction to it,” said Winningham.

If you want to see photos of their home, mosey on down to Lumen, the newest condominium development of Seattle-based Landstar Development, co-owned by Winningham and his Texas-based business partner, Gerhard Kleinschmidt.

The project is being developed with Winningham’s sensibilities in mind, including his mantra that all space be usable.

The great room blends into the kitchen, but because refrigerators and dishwashers are disguised behind wood cabinet fronts, the area appears larger and more conducive to entertaining. Sliding glass doors lead to the patio, again adding to the expansive feel.

A kitchen island divider also serves as a bar and a media center. Some room separators have storage on one side and a china buffet on the other.

Lighting is recessed, even in the bathroom. Kitchen electrical outlets are encased in a unit that can be lowered into the counter when not in use. Beds offer a hidden compartment for storage.

Together the features create a uncluttered feeling that makes the units feel larger than they are.

This is interesting because the Lumen condos, which range from 500 to 2,100 square feet, are about 10 percent smaller than traditional units, according to Dean Jones, president of Real Project Marketing, which is marketing the project.

That’s a sign of the times. As land and construction costs have risen, one way to keep condos reasonably priced is to make them smaller and more efficient, said Winningham.

Nationally, developers are doing it to cope with escalating costs, said George Rolfe, a University of Washington associate professor of planning and real estate.

Just stuffing a typical condo in a smaller space won’t work, he said. Furniture doesn’t fit and rooms feel cramped. So developers are creating adaptable spaces. For instance, Rolfe said, offices are hidden when not in use and transformed into, say, an area for a cocktail party. Bedrooms have fewer walls and no windows but movable dividers so they can be opened up to create an expansive feel.

What sets Lumen apart is the focus on making spaces appear larger than they are, Rolfe said, and the fact that Landstar is advertising the design process.

“That’s really what Lumen’s trying to do: How do you take a small space and make it big,” Rolfe said. “I think they’re going to be quite successful at it.”

“A lot of people do that. Val just seems to be better at making it work,” he said.

“Right now one of the hottest things that architects have to sell is the ability to manipulate those spaces so that people think they’re getting more than they are,” Rolfe said.

Lumen, a mixed-use residential and retail project with a northern European contemporary look, will have a 40,000-square-foot QFC with a Starbucks. A fitness facility, garden center and upscale restaurants may occupy the remaining 35,000 square feet, offerings intended to draw people from the neighborhood, Winningham said.

It is now under construction by Exxel Pacific.

“It was always intended to be a very high design statement,” said David Hewitt, president and founding principal of Hewitt Architects, which designed the project.

The site slopes dramatically, allowing one level of retail on one corner and two levels on another. One of the two residential lobbies is 2 1/2 stories high and some of the corridors extend three stories.

“Spacially, as you move though the building on a day-to-day basis, you’ll be constantly aware of the change in scale of the (public) spaces,” said Hewitt.

The perimeter of the retail areas will be all glass, which will make the building “almost startling both day and night,” Hewitt said. “It will really be identifiable from far away.”

One of the more unusual aspects of the project is what Jones calls “maximum personalization opportunities.” The base condo will be an open floor plan with a minimum of interior walls. It will have a kitchen, bathroom and great room with all appliances and fixtures and either finished concrete floors or solid surface flooring.

Lumen, in partnership with First Horizon Mortgage, is offering an interest-only line of credit up to $35,000 for financing add-ons from the time a buyer puts down 5 percent earnest money to when the sale closes. After that, those costs can be added to the purchase price.

Jones said focus groups initially said they wanted stainless steel appliances and fireplaces, but then they responded to images of the high style design and efficiency found in the Lumen units.

That’s akin to what University of Washington researchers found when they did a study nearly 20 years ago, said Rolfe. The researchers, including Rolfe, looked at how units in three then-new Seattle high-rise condo projects sold. Despite the fact that buyers said they wanted gourmet kitchens and balconies and other amenities, the researchers found that, after adjusting for view, condos with the most livable/usable space sold the fastest and got the highest per square foot price.

If given the option, people would rather live large — literally, Rolfe said. But they are becoming more savvy and realistic. 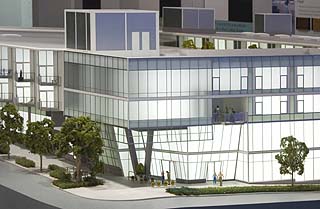