NAIOP Night of the Stars Awards

NAIOP’s Night of the Stars: Let’s recap the winners!

Last Thursday, held over in Bellevue, was NAIOP’s annual Night of the Stars gala. There’s a long list of 2022 winners, a few of which were tipped in September. We’re running several of them here; and if you want even more eye candy, visit http://www.naiopwa.org. Below, the general awards, followed by the people and the buildings.

Developer: Unico Properties. Founded in 1953, Unico will forever be associated with the University of Washington’s 10-acre Metropolitan Tract in downtown Seattle. Since then, of course, Unico has expanded its reach up and down the West Coast, and to Denver, Salt Lake City, Austin and Nashville. It now has some 17 million square feet in its portfolio. Ahead, one of its big local developments is the phased makeover of the 158-acre former Boeing campus in Renton, where Sounders FC will have its new headquarters and multiple practice fields.

People’s Choice Award: Qualtrics Office Buildout at 2+U. The occupant, with about 275,000 square feet, wasn’t named by NAIOP, but we all know the lead tenant in Skanska’s fairly new downtown office tower. IA (aka Interior Architects) configured the space, with Swinerton as the builder. 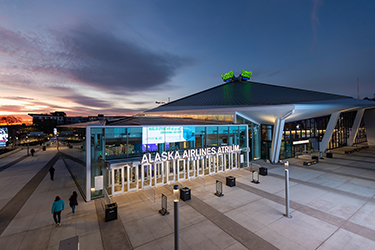 Judges’ Award, Best in Class Development: Climate Pledge Arena. The Kraken and Storm are already making excellent use of the former 1962 World’s Fair venue, with its landmarked roof designed by Paul Thiry. Its name has changed over the years, but the CPA is now much deeper, greener, grander and bigger — with the new Alaska Airlines Atrium, and a seating capacity than can accommodate some 18,000 spectators. Oak View Group and CAA Icon partnered on the redevelopment, which was designed by Populous. Mortenson began the demolition and excavation in 2019, and the CPA opened last fall. Playing this Saturday are The Smashing Pumpkins, which last visited what was then KeyArena in 2018.

Investment Broker: Jim Reed of Lee & Associates. Among many notable transactions, he recently represented the new unitary owner of the seven-building Park at Willow Ridge, in Redmond, where Meta/Facebook already has one building — and may expand its presence.

Industrial Broker: Bill Condon of Colliers. Working with others at the same firm, one of his current notable listings is the polluted former Time Oil property, with 11 acres in Interbay, now owned by Cantera. InSite is already planning a new self-storage building; other tenants will likely follow.

Veteran industry figure John Pietromonaco was also inducted into NAIOP’s Hall of Fame. He currently leads Pietromonaco Jackson Properties, which is based on Mercer Island. 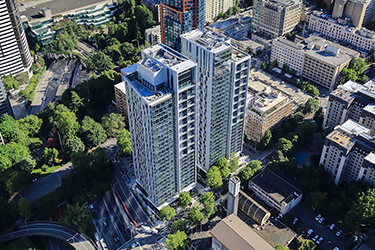 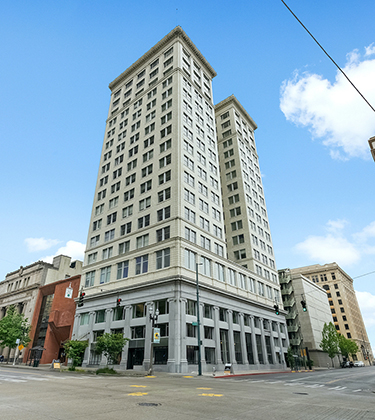 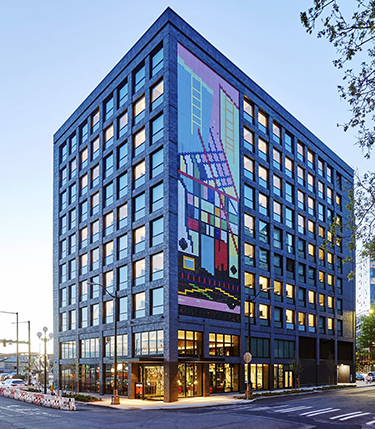 High-Rise Residential Development: Ovation Towers. Everyone repeat after me: The company formerly known as Lennar Multifamily Communities is now Quarterra, which partnered with Perkins Will and JTM Construction on the twin-tower project on the Town Hall block. With about 548 units in its two 32-story towers, that luxury project is now leasing.

Historic Renovation: The Astor. Down in Tacoma, formerly known the Washington Building, this old downtown office building was flipped to apartments by Unico Properties, Venture General Contracting and Fish Mackay Architects. The 18-story building now has 156 apartments. And the old bank vaults have been converted into a resident speakeasy-style bar and cocktail lounge.

Hospitality Development: citizenM’s newest location is in Pioneer Square. Gensler designed the 10-story, 216-room hotel, with Mortenson as the builder. Trendy tourists are constantly rolling their suitcases in and out of the new structure on the corner of Yesler and Alaskan — mere steps from the ferry terminal and waterfront.

Industrial Build-to-Suit Development: Costco Logistics’ DDS Distribution Center. Down in Tumwater, CRG was the developer, with parent company Clayco the builder. Lamar Johnson Collaborative designed the 1.1 million-square-foot project, which is valued at $160 million.

Industrial Speculative Development: Pacific Gateway. Down in Kent, on land acquired from Boeing. Partners Panattoni Development and Link Logistics (part of Blackstone) are planning six buildings with a possible 823,544 square feet. Nelson is the architect and Sierra the builder. Newmark is brokering the space. 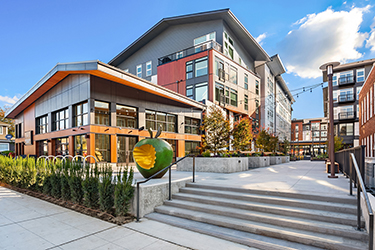 The Schoolhouse District
Mixed-Use Development of the Year 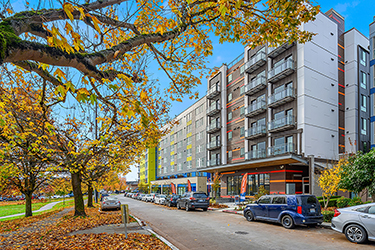 Mixed-Use Development: The Schoolhouse District. MainStreet Property Group has big plans for Woodinville, and there are future phases yet to come for this sprawling project. MainStreet’s related firm GenCap Construction has been the builder, with GGLO designing the whole complex. It centers around the preserved century-old schoolhouse, now home to Walla Walla Steak Co. and Crossbuck Brewing. The new apartment buildings have 264 units. HAL Real Estate has partnered with MainStreet on the project, which also includes the so-called Wine Walk.

Multifamily Residential Suburban Development (over 100 units): Carling and Sawyer. Within the Port of Everett’s Waterfront Place larger mixed-use expanse, SeaLevel Properties and Gracorp developed these two buildings with 265 units. Architect Tiscareno Associates and Graham Construction persevered on the project, which suffered a fire during construction — meaning the Carling had to be restarted nearly from the foundation. 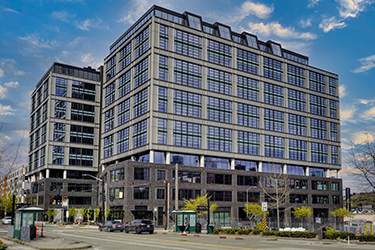 Multifamily Residential Urban Development (over 100 units): Beam. Intracorp worked with Tiscareno and builder Exxel Pacific on this seven-story, 321-unit project on the east end of the International District — what some would call Little Saigon. It faces South Jackson Street and the streetcar line.

Office Development: Dexter Yard. On a formerly polluted block in South Lake Union, BioMed Realty’s two-tower project is really a life-science development, which is quickly being claimed by various biotech firms (CBRE is the broker). SkB Architects designed Dexter Yard, and Turner Construction was the builder. The two 15-story towers have a skybridge and lots of ground-floor amenity space. 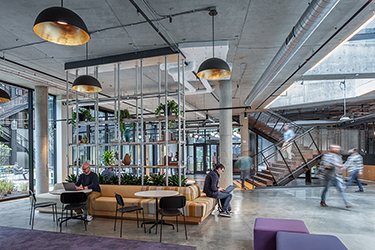 Office Interiors: Block 20. At the Spring District in Bellevue, Block 20 is the new moniker for what was once slated to be REI’s headquarters, before Facebook bought that empty new building in 2020 — then began claiming all the new offices rising around it. Gensler did the interior reconfiguration for Meta (Facebook), with BNBuilders as the contractor. Wright Runstad and Shorenstein Properties are being the broader 36-acre Spring District, where NBBJ has designed all the office buildings to date.

Redevelopment/Renovation: Mercer Park. Once home to Farmers Insurance, the now 40-year-old office building on Mercer Island was acquired by HAL Real Estate and Ryan Cos. two years ago; it was then totally vacant. Burgess Design led the renovation effort, with Ryan doing the construction. Colliers landed the new sole tenant and owner: Riot Games, which paid over $114 million last December. That was after about 20 months of ownership, and an initial investment of about $46 million. 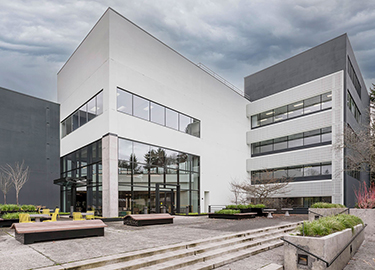 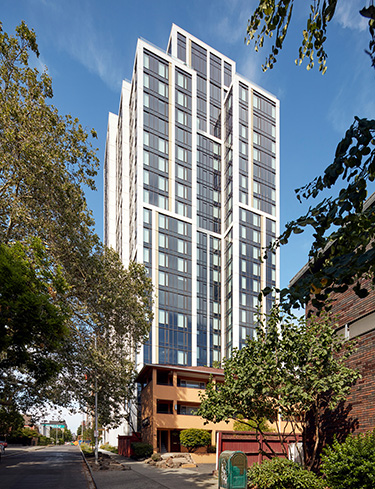 Student Housing Development: The Accolade. High-rise student towers are sprouting all over the U District, and Greystar was early to the game. Weber Thompson designed the 240-foot-tall, 21-story tower, which was completed this fall by Exxel Pacific. It has 226 units and 597 beds.

Sustainable Development: Ellie Passivhaus. NK Architects and Balance Architects were behind this 32-unit midrise project in Uptown. Sound West Group developed the project, with Cascade Built as the general contractor. Ellie’s energy use is about 64% of a comparable project employing conventional construction — unlike the nearly airtight envelope used here.

Community Impact Development: Seattle Indian Health Board’s new clinic at the Chief Seattle Club is being honored, but that 2,600-square-foot component is but a part of the larger 80-unit affordable housing development in Pioneer Square. Swinerton Builders did the build-out for the second-floor clinic. Jones & Jones was the architect for the eight-story building, aka ?ál?al, with Walsh Construction as the builder and Beacon Development Group the owner’s rep.