Building designed like a ‘Swiss watch’ for tight urban site

Everything in the $19 million building for The Northwest School is designed to be multi-purpose, even the roof, which has a sports field.

When you pass the new addition at The Northwest School in Seattle, be sure to look up.

There’s a 6,000-square-foot sports field on the roof of the new building at 401 East Pike St. on First Hill, and that’s just one way the project responds to what is a very tight urban site.

“Basically every inch counts. You have to make every space do double duty,” said Richard Franko of Mithun, which was the project architect, landscape architect and interior designer. When you are working with a 9,650-square-foot site, he said, “You have to do things that take advantage of verticality — and really celebrate it.”

This is the first new building for the 33-year-old preparatory school that serves grades 6 to 12, and includes an international boarding program.

The school’s main building is at 1415 Summit Ave. and was built in 1905. One block away, a former apartment building is the international students’ dorm.

In the past, the dining hall was a few blocks from the school, and the gym was in a nearby church and community center.

Initially the new building was to include some parking, but that gave way to the desire to be more sustainable and use the space for a black box theater — a boon to the school’s theater program, said Franko, who is a design partner at Mithun and led design for this project.

The theater has state-of-the-art acoustical systems, a green room, and a sound and lighting control booth.

Franko said it was important to create utilitarian spaces.

There are concrete slabs between the theater, dining hall and gym, and acoustical material was used in the gym floor to reduce vibrations.

Core elements of the building — elevators, bathrooms, HVAC and stairs — had to be carefully placed at the property line to create as many usable “active” spaces as possible.

That was accomplished using Building Information Modeling software and coordination with the engineers and the contractor, Exxel Pacific, said Franko.

“Once you go vertical that infrastructure becomes more intensive,” he said. “It’s almost like an intricate Swiss watch to get all the utilities working through there.”

School officials also wanted to connect the building with the neighborhood so the dining hall is enclosed by windows, and windows punctuate the gym, offering daylight and views of a historic church across the street.

To create connections between floors, the stairs offer views of other levels and landings for gatherings.

About a quarter of the hot water is heated by an evacuated-tube solar system on the roof that is expected to be more effective in the Northwest’s climate than typical solar.

Vintage chalk board panels from the school’s main building are used to post student announcements.

Daylighting in the gym was designed with the University of Washington’s Integrated Design lab, with glazing that optimizes daylight and reduces glare.

The streetscape is designed to exceed the new Seattle Green Factor requirements. It uses all native and/or drought-tolerant plants, preserves existing trees and has a 30-foot-high wall with vines.

The building has a web-based, energy dashboard with an interactive, 42-inch screen. Students and faculty can monitor the mechanical systems, including air flow and energy consumption. The data will be integrated into science classes.

The gym has experimental elements, too. In dense cities like Hong Kong and New York, sports area have to go vertical, Franko said.

The Northwest School’s gym is unusual in Seattle, he said, but this type of design will become more important here as people look for ways to make urban buildings work for families.

The gym has a workout area in the mezzanine, and a chain link fence and heavy duty netting to keep balls and Frisbees where they belong.

It’s also got one heck of a view.

“It’s kind of an amazing space up there,” Franko said. “You can see a float plane on South Lake Union taking off or you can see the dome of a church.” 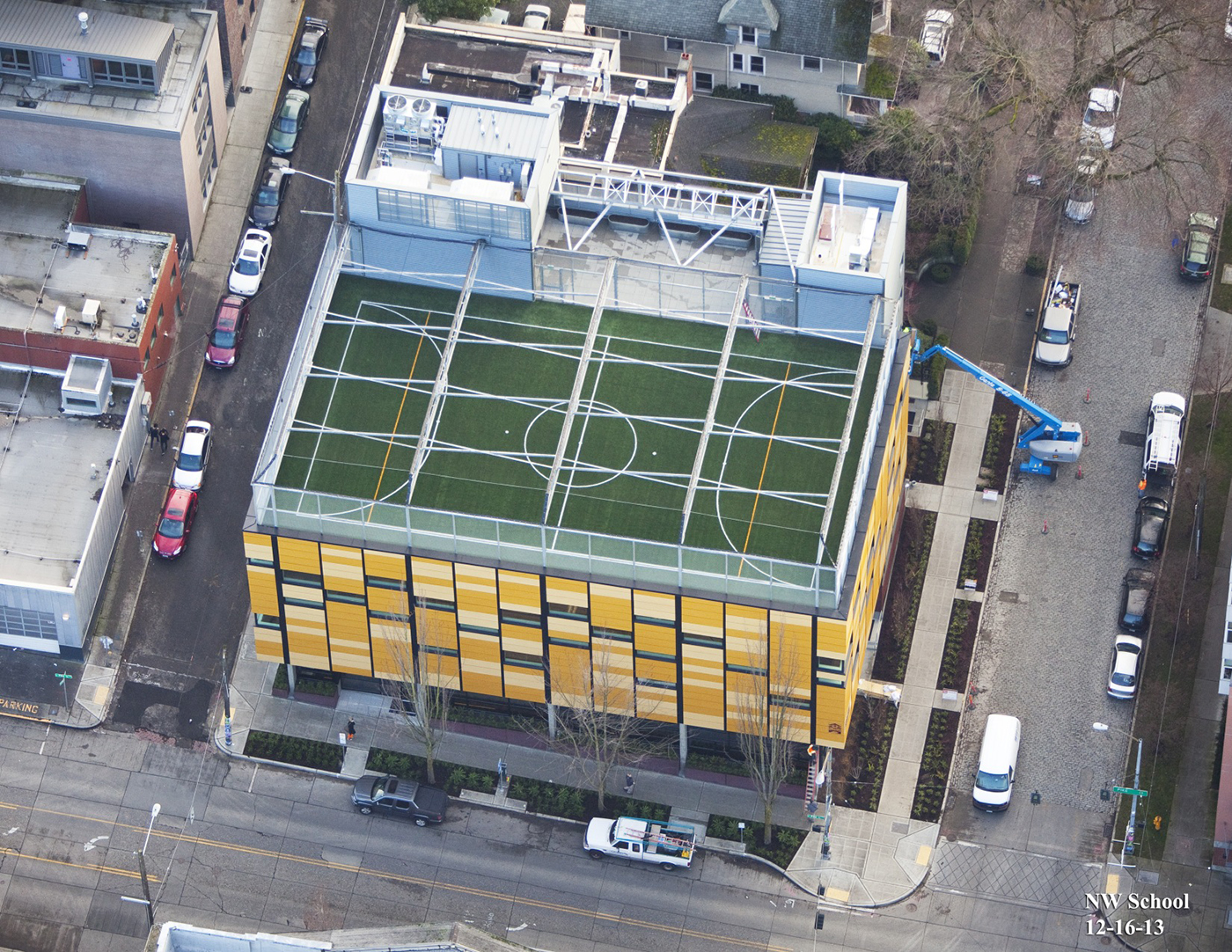