It was a big day for a big project: Seco starts Southport office space

Seco Development’s Southport is unique so it makes sense that Thursday’s groundbreaking for the project’s three office towers was different.

Along with the usual set of real estate professionals and political leaders was Seattle Seahawks running back Thomas Rawls and members of the Sea Gals cheerleading squad.

The project team knew when it announced a January groundbreaking that the weather would be iffy so they held the festivities inside a large, see-through tent on the banks of Lake Washington. There was the ceremonial moving of dirt but most of the crowd didn’t see it.

This was a big day for a big project. The office portion of Southport is three nine-story buildings with 730,000 square feet.

Southport also has a 12-story, 347-room Hyatt Regency hotel that is under construction and set to open June 2017. Seco already built 383 apartments.

The office towers will be built at the same time, with a projected opening in 2018.

The 17.1-acre site is in Renton on Lake Washington between the Boeing plant and Gene Coulon Memorial Beach Park.

When complete, the three office buildings will make up about 12 percent of the Renton-Tukwila office market. That would be like adding four Columbia Centers to downtown Seattle’s office market, according to Kip Spencer, Seco’s director of leasing and marketing.

Seco said it will have more than twice as much available space as any other nearby building or office complex. Rents will be about 25 percent lower than those in downtown Seattle and Bellevue.

Seco said it is starting without any preleases because it is confident about the market and has gotten a lot of interest from potential tenants.

“Someone is going to recognize the benefits and the unique characteristics of the site and they are going to be wise enough that it will not only become an amazing asset that everyone is going to be jealous of when they look out over the lake, but it’s also going to herald a transition,” said Michael Christ, president and CEO of Seco.

Christ said Southport will help turn the area around from manufacturing to mixed-use and attract the tech companies that make up most of the new leases in this region.

Seco also started the hotel on a speculative basis. Work began in October 2014, and Seco announced Hyatt Regency as the operator about 11 months later.

MG2 designed the hotel and Sellen Construction Co. is the general contractor.

Seco is working with Seattle Family Regional Center, an EB-5 center run by Michael Christ’s wife, Min, and the project appears to have a number of Chinese connections. Bouquets of flowers at the groundbreaking were decorated with Chinese characters, and Michael and Min Christ took turns speaking to the crowd in English and Mandarin, respectively.

Seco estimated the value of Southport will be about $1 billion when it is completed and occupied.

“We put the project in the drawer,” said Patrick Gordon of ZGF, who spoke at the groundbreaking event. “There were a lot of us who never thought it would come out of that drawer again.”

Gordon said Christ’s tenacity and resilience kept Southport alive. Plans changed over time, including a complete redesign of the office space in 2014 to focus on the open, collaborative spaces that employees crave today.

To make the building tech-friendly crews will put in a fiber Gigabit Passive Optical Network, with up to 100 GB data speeds, strong network infrastructure and redundant power systems. 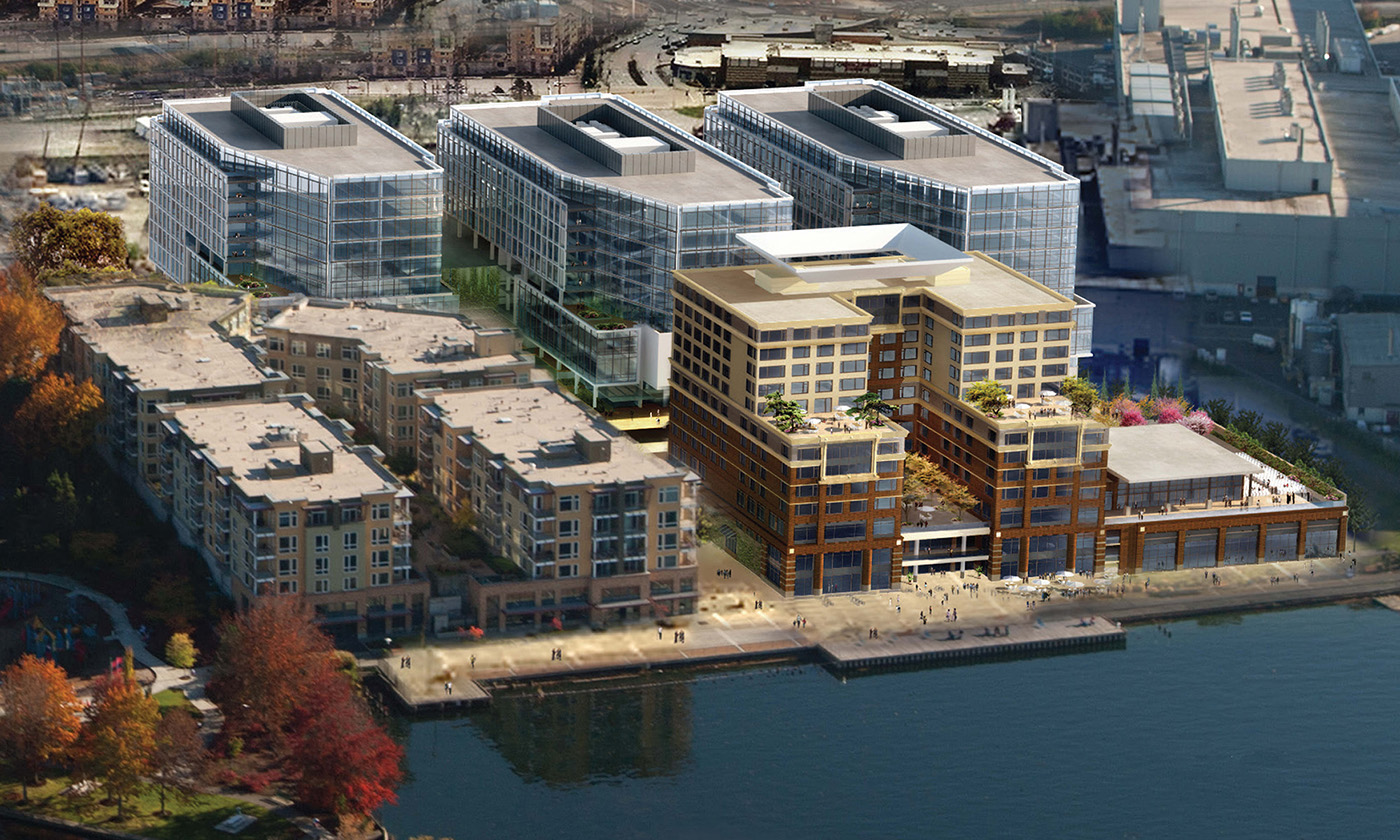