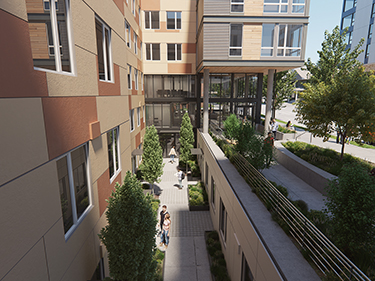 Ankrom Moisan designed the Theory U District housing project, which has a nominal 171 units — all to be furnished.

Excavation work has been underway for several weeks on the corner at 4731 15th Ave. N.E. where University Christian Church was razed last year. Now Peak Campus of Atlanta and Blue Vista Capital Management of Chicago have announced the formal commencement of construction for the seven-story, 441-bed Theory U District student housing project.

Ankrom Moisan designed Theory, which has a nominal 171 units — all to be furnished. The corner sold about a year ago for $18 million.

The developers announced a recent construction loan from Bank of Oklahoma; public records put that at just under $56 million.

The goal is to open the building by the fall of 2022, when post-pandemic, in-person learning is again expected to be the norm at the University of Washington.

Peak’s Jeff Githens said in a statement, “We are very excited to be under construction in the vibrant University District market with a well-conceived and differentiated project.”