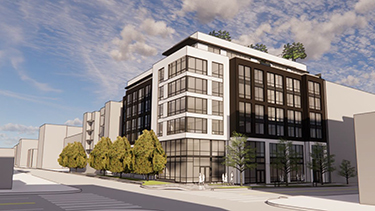 57 Ballard is one of two apartment projects planned by Saratoga Capital in the same area. GGLO is the architect for both.

Property owner Saratoga Capital and architect GGLO are now planning a 75-unit apartment project at 1761 N.W. 57th St. in Ballard. The proposal for the corner, at 20th Avenue Northwest, will have its likely final administrative design review in November.

Saratoga paid about $9.5 million last year for both that corner and a nearby corner to the west — we’ll recap the latter, more advanced plan below. GGLO is designing both apartment buildings.

The east project now seems to be called 57 Ballard. It’ll be a seven-story building with 59 underground parking stalls, which will likely employ stacked parking.

Since the last design review in May, GGLO has lessened the contrast between the building’s north and west facades — facing 57th and 20th, respectively. They’re a little darker and more muted, with only two hues. The planned notch or setback above the garage entry on 57th has also been deepened. Seventh-floor terraces overlooking 20th have also been tweaked.

One commercial bay on the building’s northwest corner will have around 800 square feet. Outdoor seating areas there have been expanded. The lobby and co-work areas facing 20th are also now more open to the street.

Otherwise the proposal is about the same, with a project size of about 84,600 square feet (roof deck and parking included). Saratoga will pay a Mandatory Housing Affordability fee of about $1.1 million, with all the units market-rate.

Across the avenue at 2002 N.W. 56th St., the west building is dubbed 56 Ballard. It’ll have seven stories, 53 units and 24 parking stalls (stacked, and both above and below grade). That project already has a master use permit, which Saratoga acquired with the land. The general contractor couldn’t be confirmed before deadline.