Unlike the conventional shear-wall concrete, the dense steel-fiber-reinforced concrete had to be bucketed in by crane, rather than pumped.
Trailblazers seeking a faster, safer and less costly way to build concrete shear walls in seismic-zone high-rises have pioneered the use of steel fibers as link-beam reinforcing-steel “decongestants.” Having smoothed the path and proven the concept on a limited basis in a 24-story tower in Seattle, the builders of The Martin Apartments say they are eager to use the approach on a broader scale

“This unties the Gordian knot in seismic link beams, which have [bedeviled] contractors for years,” says Cary Kopczynski, the force behind the rebar decongestants and president of the Bellevue, Wash.-based structural engineer that bears his name.

“I would absolutely sign up for it again,” says Brian Foster, The Martin’s project superintendent in the Seattle office of Exxel Pacific General Contractors. “It is a labor and time saver” if used from the outset of a job, he says.

Seismic link beams, which span shear-wall openings, are especially challenging to build. In addition to horizontal rebar with ties and stirrups, the prescriptive seismic code requires heavy X-shaped bars—the Gordian knot—that are difficult to insert because they often collide with the horizontal bars.

Batch-plant-mixed steel-fiber-reinforced concrete (SFRC), which is ductile and strong, cuts link-beam rebar by about 40%. The approach eliminates diagonal bars and reduces the size of the flexural and shear bars that remain, says Kopczynski, who has been trying to use SFRC beams for a decade.

The Martin, topped out in December, has five link beams per level. For the first installation, Kopczynski chose fibrous concrete for the two most challenging beams—those near the core’s corners—which have the heaviest diagonals and are the toughest to install. “We wanted to walk before we ran,” he says.

In the future, Kopczynski envisions SFRC applications beyond seismic link beams, including ductile moment-resisting frames with highly reinforced beams and columns. Soon, concrete with fiber, like adobe with straw, will be a homogenous material, he says.

The Martin’s SFRC cost about $800 a cubic yard—about 10 times more than conventional concrete. “All stakeholders entered into the project cautiously, and pricing reflected that,” says Kopczynski.

Foster agrees, saying the true cost of SFRC is about $350 per cu yd.

The local developer had the entire building permitted conventionally, in case the novel SFRC system did not gain city approval. “This was done as a change order,” says Andrew Clapham, senior director of design and construction for Vulcan Inc. “When you can get competitive bidding, the price will go down.”

SFRC—typically used for crack control in footings, piles, slabs, walls, beams, columns and roofs—is not yet in the seismic building code. For permitting, Kopczynski applied for use of the SFRC under Section 104.11 of the 2006 International Building Code, which allows for alternate materials, design and methods.

Under Section 104.11, the engineer of record must show the building official the alternate will provide equivalent performance. “I said we would accept the change, proposed after the building was approved, as code-conforming if the system was peer-reviewed,” says Steven Pfeiffer, engineering and technical codes manager in Seattle’s Dept. of Planning and Development (DPD). “It was a challenging process,” he adds.

DPD required peer reviews from a practitioner and an academic. Until SFRC link beams are in the code, which could take six years, DPD will require a review for each SFRC project, says Pfeiffer.

Kopczynski based his scheme on information from performance tests at the University of Michigan (ENR 4/19/10 p. 12). The first snag in the review process was that the initial submittal did not match the tested assemblies regarding steel, fiber content, shear demand and aspect ratios, says Pfeiffer. There was also concern about the SFRC mix.

For the reviewers, the biggest challenge was that “the Michigan tests alone were not sufficient to extrapolate to higher levels of shear stress,” says Joe Maffei, who did the review with Richard Sause, a professor of engineering at Lehigh University, Bethlehem, Pa.

Eventually, Maffei and Sause found other tests they could use. However, based on their concerns, Kopczynski changed the shape of the beam.

“We all were in agreement that fibers in concrete can have a number of performance benefits in terms of shear stress and ductility,” says Maffei, who was a principal with Rutherford & Chekene when he did the review last year. A month ago, Maffei left R&C to form Maffei Structural Engineering, Oakland, Calif.

In the end, Seattle’s DPD required fiber from the supplier for the Michigan tests. It also insisted on 200 lb of fiber per cu yd of concrete to match the tests. “If you have a lot of testing, you can sometimes interpolate and extrapolate, but [with] limited testing, you have to build what was tested,” says Pfeiffer.

The city also was concerned about sufficient slump in the SFRC to allow proper placement and vibration. During a trial run, the team discovered the high dosage lowered the slump, which measures the concrete’s fluidity, to less than two inches. It was too thick to place.

Ultimately, the team used a chemical admixture that created self-consolidating concrete. The result was a workable, 8-in. slump, acceptable to the reviewers.

SFRC minimizes ironworker field labor, and it removes fear that ironworkers might eliminate or cut horizontal rebar or stirrups that collide with diagonals, says Russell Soeters, regional manager of the Kent, Wash., office of The Conco Cos., the concrete subcontractor. “SFRC simplified installation of rebar in the wall, which is a large benefit,” he says.

But the approach made concrete logistics more challenging. SFRC, which is too thick to pump, was bucketed in by crane, while the rest of the job was pumped.

That meant two concrete operations, which had to be coordinated. “The process, for us, added complexities on placement day,” says Soeters.

The SFRC link beams’ three-month review, which cost Vulcan about $28,000, resulted in an approval letter dated last June 26, which was later than the team had anticipated. The building was already up eight floors, so a decision was made to start the SFRC beams at level 12.

A big takeaway for Kopczynski, who remains upbeat despite the long approval process, is that innovation takes a large dose of patience. “We did not get any more fee, but it took a lot more [design] time than anyone ever expected,” he says.

Maffei says, “It’s very helpful to have these kinds of initial trial applications because that’s how one works out any difficulties. There were some bumps along the road, but ultimately, it was successful.” 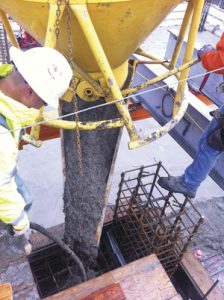