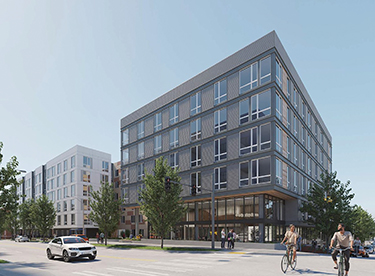 Peak Campus of Atlanta is developing the 171-unit Theory U District.

University Christian Church, at 4731 15th Ave. N.E. in Seattle’s University District, was recently demolished by new owner Peak Campus of Atlanta, which specializes in student housing. Its plan is to redevelop with furnished apartments designed by Ankrom Moisan.

The city’s next administrative design review for Theory U District is in late June.

The new building will go on the corner of Northeast 50th Street, which slopes down to the alley to the west. It’ll rise six stories above 15th, and seven above the alley. It’ll have 171 units, with some on the alley. A diagonal central courtyard will connect to the alley.

There will be no parking, but Peak says 60 stalls will be leased separately on the east side of 15th at Bellwether Housing’s Arbora Court. (That, too, was developed on land once owned by UCC.) Several bike rooms will have an unspecified number of stalls.

Peak paid $18 million for the corner in December.