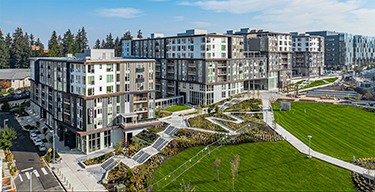 Verde’s massing is intended to mimic the natural landforms and patterns of the Sammamish Valley.

Construction is officially complete and apartments are renting at Verde, a new 636-unit multifamily development in Redmond.

The project, at 2808 Calder Ave. N.E., is located on the north side of Capstone’s 28-acre Esterra Park campus, which is itself nearing completion. Verde abuts a 2.6-acre lush green park at the center of the development. It is also adjacent to Microsoft’s Redmond campus and around a five minute walk from the forthcoming Overlake Village light rail station, now set to open in 2024.

Runberg Architecture Group designed Verde and Exxel Pacific was the general contractor. The development consists of two linked eight-story buildings and totals 789,380 square feet, including amenities and parking. Amenities include a dual level fitness center, conference rooms and co-working space, sauna and steam room, and an on-site market. The project also has 34,000 square feet of outdoor amenity space. This includes two courtyards, two rooftop decks with grills, and a central mews. There is parking for around 571 cars, many with EV charging stations, and 636 bike stalls. 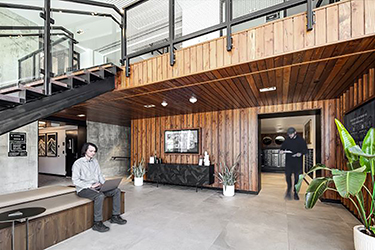 [enlarge]
Harvested wood is used in the project’s amenity spaces.
As implied by the name, which means green in Spanish and Italian, Verde is designed to facilitate and encourage healthy living and has been built to the highest sustainability standards. The development is aiming to be the first multifamily project in Washington state to achieve LEED Zero Carbon. Runberg says this will be achieved through a combination of construction choices, operational decisions, green power, and carbon off-sets.

Verde is an all-electric building. It uses no gas for utilities and instead utilizes high-efficiency electric water heaters, cooking equipment, washers, and driers. All units have electric heat pumps or mini-splits for heating and cooling.

The natural world and context of the site, especially its connection to Esterra’s central park, also influenced the design, which Runberg says is informed by “the natural splendor of the region.” The building masses have a unique stepping intented to mimic the natural landforms and patterns of the Sammamish Valley and its central spine serves as a walkway that mirrors the hill climb and stairs in the adjacent park.

Internally, the project uses harvested timber from trees removed to make way for the development in stairs, furniture, wall coverings, and other features, in its amenity spaces. In addition, as part of the development over 3,000 trees were planted in parks across Redmond and Bellevue to replace those removed from the site.

Verde is the last of six new multifamily projects to open at Esterra Park, which now has just over 2,600 rental units. The development also includes the linked Aloft and Element hotels and an office building leased to Microsoft.

Still to come is a new pavilion to be built in the center of the park, potentially including a new cafe operated by Black Bottle. That project is currently under review with the city of Redmond. The pavilion was previously intended to be an additional amenity space/community lounge for Verde residents. The park and pavilion are privately owned but open to the public.